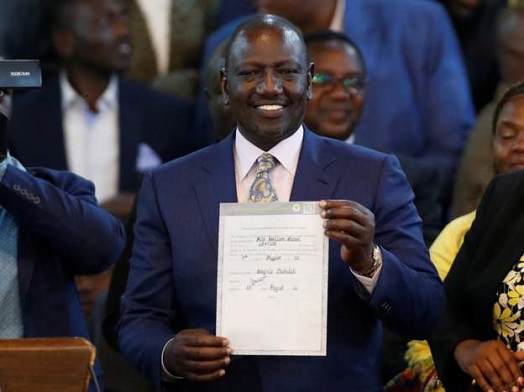 William Ruto was declared the winner of the election with 50.49% of the vote
Shares

The US embassy in Kenya has lauded Kenyans for a peaceful vote and urged all parties to work together to peacefully resolve any remaining concerns.

It said the declaration of William Ruto as Kenya’s president-elect was an “important milestone in the electoral process”.

“Going forward, we urge all parties to work together to peacefully resolve any remaining concerns about this election through existing dispute resolution mechanisms,” it added.

The embassy asked political leaders to continue to urge their supporters to remain peaceful and refrain from violence during the electoral process.

Mr Ruto was declared the winner of the election with 50.49% of the vote – narrowly defeating his challenger, former prime minister Raila Odinga.

Mr Odinga's poll agents however said they could not verify the result and some electoral commissioners announced that they were unable to "take ownership of the result".

Mr Ruto has pledged to work for all Kenyans, saying that the results process was "the most transparent ever" in Kenya.

Celebrations broke out in strongholds of Mr Ruto while some protests were reported in key support areas of Mr Odinga.