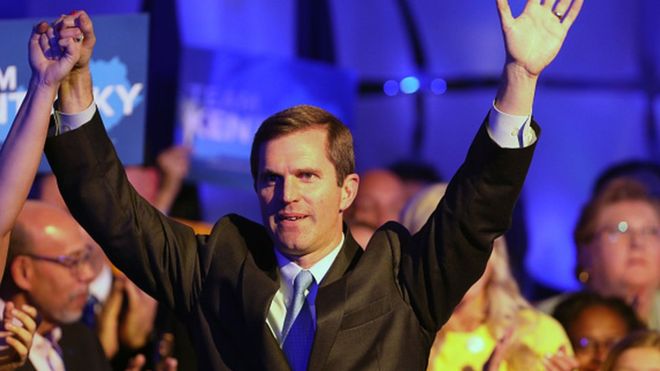 US Democrats have made gains in state elections, in what is being seen as a blow to President Donald Trump.

Meanwhile, Democrats seized full control of the legislature in Virginia for the first time in over 20 years.

The results are being viewed as a gauge of the political mood ahead of next year's presidential election.

However, Republicans held onto power in the Mississippi governor vote, following a closely-fought race.

In Kentucky, Mr Beshear claimed victory over incumbent Republican governor Matt Bevin after final results gave him a lead of 0.4%.

Mr Bevin, 52, has reportedly said he will not concede, citing unspecified "irregularities".

However, Mr Beshear, a 41-year-old attorney general whose father was a former governor of the state, said: "We will be ready for that first day in office and I look forward to it."

The loss will be seen as a setback for Mr Trump, who attempted to galvanise support for Mr Bevin at a campaign rally in Kentucky on Monday night.

In a speech to thousands of supporters, Mr Trump said a loss for Mr Bevin would be characterised as "the greatest defeat in the history of the world" by his critics.

Mr Trump, who won Kentucky in the 2016 presidential election, said Mr Beshear was "too extreme and too dangerous" to govern the state.

But despite losing the governor's race, Republican candidates claimed victory in five other votes in Kentucky, including a poll for the state's Attorney General.

Meanwhile, in Virginia, Democrats overturned Republican majorities in both chambers of the state legislature.

The election of Danica Roem, the first openly transgender person to serve in the House, and Ghazala Hashmi, who will be the first Muslim woman in the Senate, were among the Democrat's notable victories in the state.

Ahead of the vote, Democratic presidential hopefuls - including frontrunners Joe Biden and Elizabeth Warren - had campaigned with local candidates.