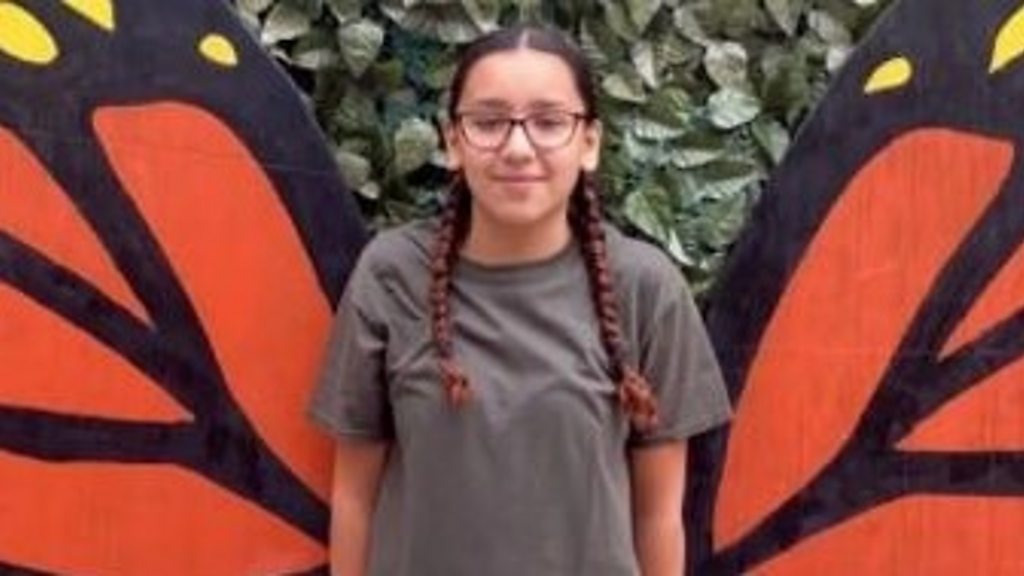 A student who survived the Uvalde school shooting by covering herself in a classmate's blood has told the US Congress of the moment her teacher was killed during the massacre.

Her graphic testimony left some representatives in tears.

"He told her goodnight, and shot her in the head," Miah Cerillo, 11, said.

The Texas primary school shooting claimed the lives of 21 people, including 19 young children, and has renewed the US debate over gun laws.

Past efforts to advance national gun-control regulations have often stalled.

Miah's pre-recorded testimony before the congressional panel was part of a number of emotional appeals for Congress to act on gun violence.

This story contains details some readers may find distressing

The 11-year-old recalled her experience, which for her began when a teacher told students to hide after seeing the gunman.

The 18-year-old attacker shot her teacher as children took cover behind her desk and their book bags.

Miah was wounded by fragments in her shoulders and head. She pretended to be dead before using her teacher's phone to call 911 and ask for police.

"I thought he was going to come back to the room, so I grabbed the [her classmate's] blood and put it all over me," she said. "I just stayed quiet."

"I don't want it to happen again," she said.

"She's not the same little girl I used to play with," he said tearfully. "Schools are not safe anymore. Something really needs to change."

Lawmakers also heard from the parents of Lexi Rubio, one of the students killed in the Uvalde shooting.

"Somewhere out there, a mom is hearing our testimony and thinking to herself, 'I can't imagine the pain'," Kimberly Mata-Rubio said. "Our reality will one day be hers, unless we act now."

"Two children, whose bodies had been pulverised by bullets fired at them, decapitated, whose flesh had been ripped apart. That the only clue as to their identities were the blood-spattered cartoon clothes still clinging to them," he recalled.

He added that lawmakers are like "doctors and our country is the patient".

"We are lying on the operating table, riddled with bullets like the children of Robb Elementary and so many other schools," he told lawmakers.

"We are bleeding out, and you are not there."

The testimonies came on the same day that the Department of Justice announced it would review the much-criticised police response to the shooting.

In Uvalde, the parents of two of Lexi's schoolmates - Annabell Rodriguez and Xavier Lopez - said on Wednesday the two would be buried next to each other at a local cemetery. The 10-year-olds had become sweethearts and were photographed together outside Robb Elementary just hours before the shooting.

On Wednesday evening, the House of Representatives voted largely along party lines to raise the minimum age to buy semi-automatic rifles from 18 to 21 and ban high-capacity ammunition magazines.

But the proposal is unlikely to pass the divided Senate.

Only a handful of the 50 Republican senators appear open to new gun legislation, with Democrats seeking narrower measures as a compromise. Senators are expected to reach a final agreement by the end of the week.

Proposals with the greatest public support include a "red flag" law that would prevent individuals with mental illness or a criminal history from purchasing firearms, and expanded background checks on gun purchasers that would include private gun sales.

Republicans in the hearing argued that better school security - not gun control - was the answer.

Georgia Congressman and gun store owner Andrew Clyde said his military service taught him that "the harder the target you are, the less likely you will be engaged by the enemy". He also called for the creation of "a volunteer force of well-trained and armed staff" to assist the armed officers already stationed in schools.

Speaking at a rally in Washington DC, Shannon Watts, the founder of Moms Demand Action, a gun control advocacy organisation, told the BBC that the testimony of survivors and widespread public calls for change can be a "powerful" call to action.

"There's focus on the issue," she said. "When there's a national shooting tragedy, we finally see more people in America decide they are going to get off the sidelines."