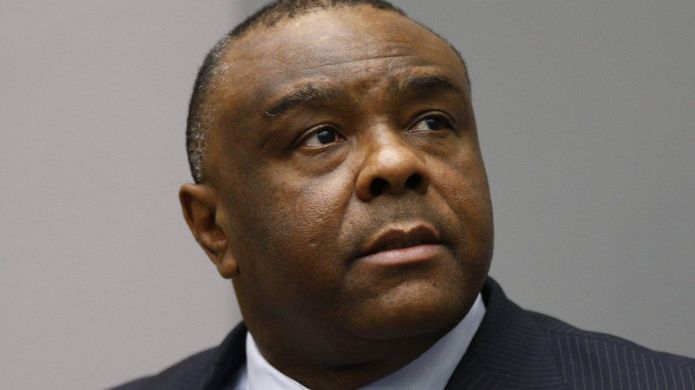 Bemba was found guilty earlier this year of war crimes and crimes against humanity, and jailed for 18 years.

On Wednesday he was convicted of corruptly influencing witnesses and falsifying evidence in that trial. Four close aides were also found guilty.

It is the first such corruption trial in the history of the ICC in The Hague.

The court heard that Bemba had masterminded a witness corruption network from inside his prison cell during his original trial. His team used secret phones and coded language to bribe, coach and manipulate at least 14 key witnesses who came to give evidence.

The case was brought following a tip-off to the prosecutors' office.

Delivering the verdict, Judge Bertram Schmitt said the case was "about clear, and downright criminal behaviour of the five accused... that resulted in serious offences against the administration of justice".

"No legal system in the world can accept the bribing of witnesses, the inducement of witnesses to lie or the coaching of witnesses. Today's judgement sends a clear message that the court is not willing to allow its proceedings to be hampered or destroyed," he said.

Also found guilty were Bemba's lawyer Aime Kilolo; his legal case manager Jean-Jacques Mangenda; Congolese politician Fidele Babala and Narcisse Arido, who had been a witness for the defence.

All five had pleaded not guilty to more than 100 combined charges. They will be sentenced at a later date and face up to five years in prison, or a fine, or both.

Kilolo was found guilty of telling witnesses exactly what to say in return for money. Mangenda played the role of messenger and tried to conceal the plan while Babala - a member of Bemba's MLC party - handled money transfers, the court heard.

Arido, who was an expert on military operations, was found guilty of getting witnesses to pose as soldiers, even providing them with fake military insignia.

Bemba was convicted in March of crimes committed in the neighbouring Central African Republic (CAR) in 2002-2003. He was accused of failing to stop his rebel forces from killing and raping people.

He was jailed in June and is appealing against his conviction.

Â Â Â  2006: Loses run-off election to President Joseph Kabila but gets most votes in western DR Congo, including Kinshasa

Â Â Â  2007: Flees to Belgium after clashes in Kinshasa