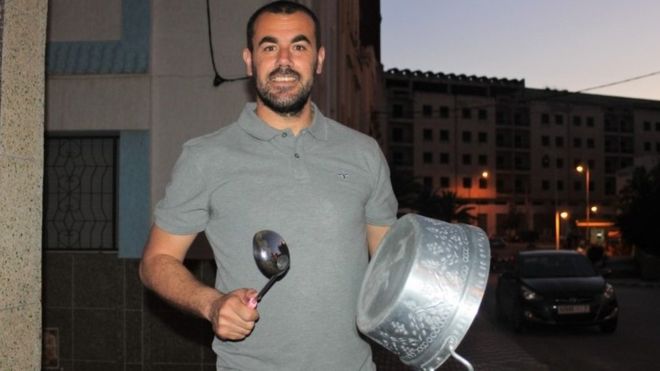 Share
Moroccan police say they have detained a leading activist responsible for organising months of protests against corruption and unemployment. Nasser Zefzafi will be tried for "threatening national security", prosecutors say.
Morocco has been gripped by protests since October, following the death of a fishmonger in the town of al-Hoceima.
On Sunday, demonstrations were reported in the capital Rabat, as well as Nador, Tangier, Casablanca and Marrakesh.
Demonstrators in al-Hoceima expressed support for Mr Zefzafi, who took to the streets to chant "the state is corrupt" and "we are all Zefzafi", AFP news agency reported.
Mr Zefzafi is seen as a figurehead among protesters in al-Hoceima and the circumstances of his arrest are unlikely to ease tensions, BBC North Africa Correspondent Rana Jawad says.
Protesters are also angered by high rates of youth unemployment and what they say is government corruption.
More than 20 activists were arrested over the weekend following clashes between protesters and the police.
Prosecutors ordered Mr Zefzafi's arrest on Friday, following allegations that he had interrupted a prayer ceremony at a mosque in al-Hoceima.
He had "obstructed, in the company of a group of individuals, freedom of worship" at the mosque, prosecutors said.
Mr Zefzafi's supporters blocked police as he went into hiding, reports said, before he was detained on Monday.
The protests were triggered by the death of fishmonger Mouhcine Fikri, who was crushed to death by a rubbish truck as he tried to rescue his produce that had been confiscated by the police.
Thousands of protesters took to the streets, accusing the authorities of corruption, abuse and injustice.
His death drew parallels to that of a Tunisian fruit seller in 2010 which helped spark the Arab Spring uprisings.
Analysis by Mohamed el-Aassar, BBC Monitoring
Footage of Mr Fikri's death was widely shared on social media, triggering the rise of Mr Zefzafi's Popular Mobilisation movement - which champions the demands of people from the northern Rif area.
The protests quickly gained momentum in the restive northern region, which has always been wary of the central government.
The Rif has seen several revolts against the central administration at different times in history. The region has challenged Spain, France and the Moroccan crown in the past.
Â
BBC
Â