Congregation walks out as pastor announces his gay partner is pregnant 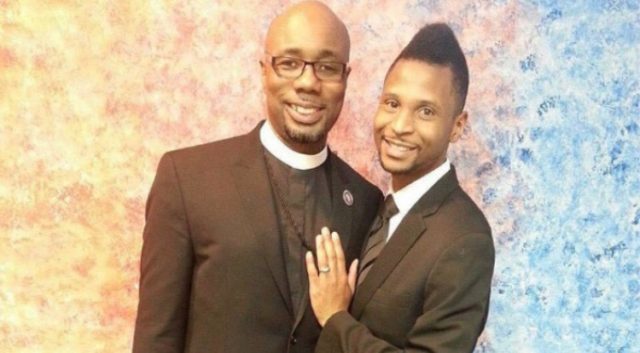 The gay pastor and his partner

It came as a shock when news got out that the pastor of Atlanta’s Little Rock Missionary Church Of God in the United States of America was gay.

The online community came out with guns blazing, quoting the scriptures as they rebuked the pastor. However, that wasn’t enough to make members of the church walkout or even consider changing their denomination.

But now the pastor has taken the whole issue a notch higher, announcing to his congregants that his sweetheart is pregnant.

Pastor Willam Terry Longstroke II told church members that his partner, “Mrs.” Donte Terry, with whom they’ve been married for one month, was three months pregnant. The pastor termed their situation a blessing.

The announcement shocked Fred Johnson, a long-time member of Rock Missionary Church Of God, that he dropped down unconscious. He had to be taken to the hospital for immediate medical attention.

Besides Johnson fainting, many members of the church who couldn’t take the idea of their gay pastor’s partner being pregnant simply decided to walk out.

However, that didn’t make Pastor Longstroke II budge. He made it very clear that he was neither going to allow his church members nor Satan to stop his blessing from coming true, adding that Mrs. Terry wasn’t going to entertain any church members propagating hate in the “house of God.”

Unfortunately for the pastor, more than 98% of the church members left the church, pointing out that they’ll only come back after Mrs. Terry delivers “her” baby.

For some of us, such developments don’t come as a surprise. We know we’re living in the last days and such things are bound to happen. Sadly, many have been blinded to such facts and are no longer relying on the Bible’s counsel, which, according to 2 Timothy 3:16, “is God-breathed and is useful for teaching, rebuking, correcting and training in righteousness.”