Man attempts to travel on wings of local airline in Lagos 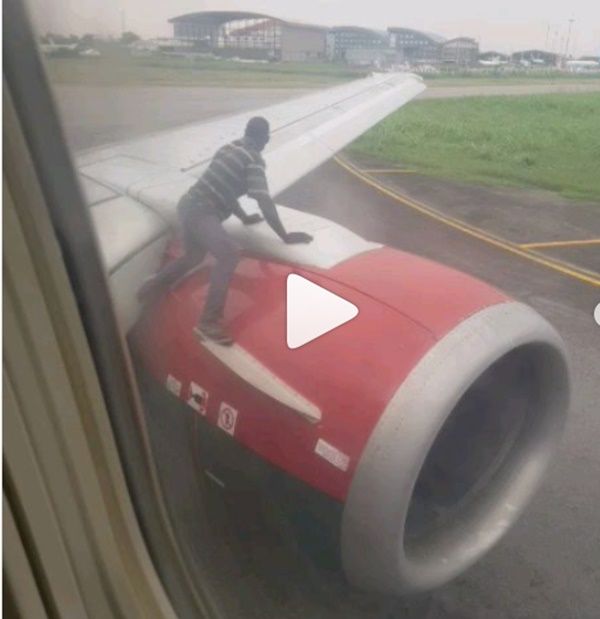 Man attempts to travel on wings of local airline in Lagos

There was fear and panic aboard a local flight in Nigeria’s commercial capital, Lagos when a man attempted to make the flight but by being on the wings of the plane.

Passengers aboard the Air Azman flight heading to the southeastern Rivers State capital, Port Harcourt, were heard begging to be allowed get off the plane for fear of the unknown.

The official account said the man (intruder) was sighted trying to climb into and Azman Aircraft waiting for clearance from Air Traffic Controllers. The pilot of the plane reported the incident to the aviation security, Avsec, and the man was arrested.

“The aircraft taxied back to the apron for a thorough check” and continued with its trip to Port Harcourt.

In narrating the ordeal a passenger, Otto Orondaam, wrote the following account on Instagram: “How it happened!! So our flight was taxing on the runway and about taking off when this man shows up running towards the moving aircraft from the bush.

“The pilot and a few passengers spotted him running towards the aircraft and the pilot immediately slowed down and quickly put off the engine. The guy approaches the plane with gloves and starts walking around and under the aircraft holding a bag which he dropped inside the engine.

“Thanks to the Pilot of the Azman Airline for quickly observing and taking swift action.. I still have a million and one questions to ask cos anything could have gone wrong! Nigeria will work perfectly someday. This I know.”

In a further statement, aviation operator, Federal Airports Authority of Nigeria, FAAN, called the incident a regrettable “air-side incursion” and said it was probing the incident.