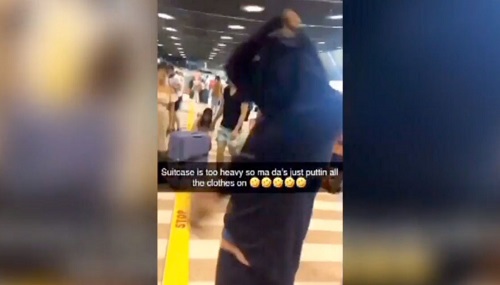 As airline baggage fees get slimmer, passengers are going to extreme lengths to get around them.

When John Irvine, from Glasgow, turned up at Nice airport in France, he was told his bag was too heavy and he would have to pay a fee to check it in.

To make his luggage lighter, he then piled on 15 shirts and jumpers in a hilarious video shared by his son Josh on Twitter.
According to Metro, the family were flying on an easyJet flight from Nice to Edinburgh.

Josh captioned the video showing John wearing the extra layers by saying he was “absolutely bloody roasting”.
This isn’t the first time a passenger has put on extra layers to avoid paying an excess baggage fee.

In April, Natalie Wynn avoided a £65 excess fee on a Thomas Cook flight by wearing seven dresses, two pairs of shoes, two pairs of shorts, a skirt and a cardigan. She was 4kg over the allowance when flying from Manchester to Fuerteventura in the Canary Islands.

Unwilling to pay £6 extra to take a second bag into the cabin or £8 to check a 10kg bag into the hold each way, Lee Cimino, 30, took matters into his own hands by converting an old coat into a wearable suitcase.

In preparation for his birthday Belfast trip, Cimino took an old beige coat to his local tailor and asked them to customise it with pockets and compartments.

He managed to fit the entire contents of a roll-on cabin bag into the lining of the coat: toiletry bags were sewn in, as well as several pairs of pants to provide extra storage.

“The worry and the nerves were something else, but I got to the gate and boarded the plane with zero issues,” he said.