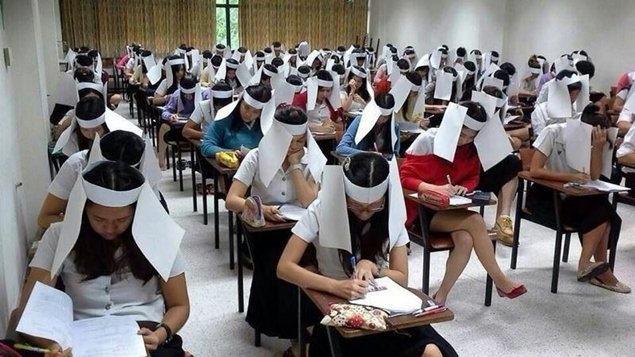 A Mexican teacher has come under fire for making high-school students wear cardboard boxes on their heads to block their peripheral vision and prevent them from copying on an exam.

Luis Juárez Texis, the director of Campus 01 “El Sabinal” at the College of Bachelors, in the Mexican state of Tlaxcala, has been accused of humiliating and breaking the basic human rights of his students, after a photo of him overseeing an exam where the students wore cardboard boxes on their heads went viral online.

The students’ parents shared the photo on social media and issued a public statement asking educational authorities in Mexico to dismiss Texis.

“We denounce these acts of humiliation, physical, emotional and psychological violence, to which the students of Campus 01 El Sabinal, Tlaxcala, are subjected. This is how Luis Juárez Texis receives, treats and humiliates students.

As parents concerned about the academic training of our children, we beg the federal and state educational authorities and institutions that ensure the rights of young people to act immediately with the dismissal of Luis Juárez Texis, director of said campus. We hope that this type of violence against the Tlaxcalteca youth is not overlooked, and that the federal and state authorities dismiss this public official and that they cease this type of humiliation in a space destined for learning…,” the outraged parents wrote on Facebook.

The photo of the students wearing cardboard boxes with cut-out eye holes that only allowed them to see in front without turning their heads was shared thousands of times since last week and was eventually picked up by mainstream media as well. However, instead of condemning the teacher, most users congratulated him for finding an effective way to prevent cheating.

“Excellent work, teacher, this does not harm them and in fact parents should worry more about their children studying than about some boxes that teach them a great lesson,” one person commented.

“Excellent technique, congratulations to the teacher,” someone else wrote.

Asked by local reporters to comment on the situation, Juárez Texis, who appears in the photo behind the box-wearing students, said that he only attended as an observer and that the students consented to the anti-copying method.

This isn’t the first time we’ve seen this kind of extreme anti-cheating technique. Back in 2013, we covered a similarly controversial story from Thailand, where students were forced to wear anti-cheating helmets made from sheets of paper.