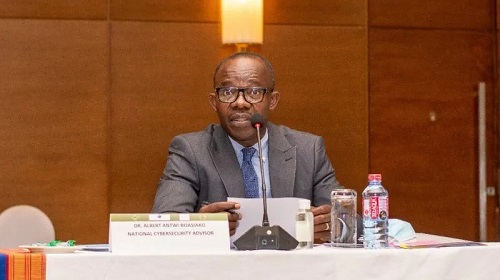 Ghana has at the end of third-quarter this year recorded a total 9,769 contacts of which 431 were actual cybersecurity incidents, acting Director General of the Cyber Security Authority (CSA), Dr. Albert Antwi-Boasiako, has revealed.

Of the total number, 5,389 of the attacks are classified as direct advisories, a situation Dr. Antwi-Boasiako explains: “It means that over 5,000 incidents which could have caused various degrees of loss to victims were prevented and various amounts of money saved”.

“Most of these attacks are perpetrated through social media using social engineering and phishing techniques. Lack of awareness on cyber risks as well as inadequate cybersecurity control measures are the main vulnerabilities being exploited by perpetrators,” he stated.

Acknowledging that cybercrimes and cybersecurity-related matters are borderless and thus both local and international collaborations are paramount in tackling them, Dr. Antwi-Boasiako said heightening collaborations with various stakeholders will play a significant role in ensuring the CSA executes its mandate successfully.

And it is for this reason that the Authority is committed to working closely with the Joint Cybersecurity Committee (JCC), which was inaugurated in July this year in accordance with sections 13 and 14 of Act 1038 for the implementation of effective cybersecurity measures, he stated.

Touching on this year’s NCSAM on the theme ‘Regulating Cybersecurity: A Public-Private Sector Collaborative Approach’, he said the multifaceted nature of cybersecurity requires a collaborative effort to ensure security of the country’s cyberspace.

“The nature of cyberspace and associated technologies, including the Internet, requires international collaboration for effective responses to cybersecurity incidents. Consequently, this year’s celebration is to highlight the need for such collaborations and encourage the needed partnerships as we implement Act 1038,” he stated.

He, therefore, implored stakeholders to honour their obligation to invest in cybersecurity, saying: “It is my expectation that organisations will dedicate a minimum of between 15 percent and 25 percent of their ICT budget to cybersecurity if we are to make any meaningful and sustainable progress in addressing our cybersecurity challenges”.

According to the World Economic Forum, cybercrime cost the world at least US$6trillion in 2021 and could lead to over US$10trillion in annual damages by 2025. Research by IBM also indicates that it takes 280 days to find and contain the average cyberattack, while the average attack costs US$3.86million.

On her part, the Deputy Communications and Digitalisation Minister, Ama Pomaa Boateng who represented sector minister Ursula Owusu-Ekuful, expressed the ministry’s commitment to full enforcement of the Cybersecurity Act.

The ministry, she further noted, is committed to NCSAM and urges the public-private sector institutions and Civil Society Organisations to participate fully in the activities this October by organising awareness programmes for their stakeholders and constituents.