A Menzgold in London? Londoners lose £236m to 'mis-selling' scheme 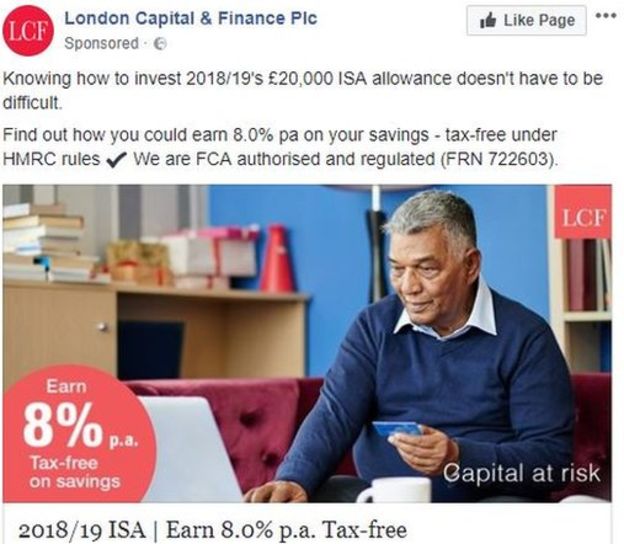 At a time when some Ghanaians are coming to terms with the loss of their investments to gold dealership company, Menzgold, thousands in London are waking up to a similar reality.

The BBC reports that thousands of people who invested in a high-risk bond scheme marketed as a "Fixed Rate ISA" fear they have lost everything after the company collapsed.

London Capital & Finance (LCF), now in administration, took £236m following a marketing campaign that is now under investigation for mis-selling.

Administrators said investors could get as little as 20% of their money back.

Peter Thornley and his wife retired to Devon after a teaching career. He now fears he may have to return to work if their money is lost.
"It put us under a lot of pressure - socially and emotionally. It makes you feel really foolish," he said. "There is a group of us bondholders; there are about 900 in ours.

"We have all got money that we have been left by parents or a lump we got on retirement, then all of a sudden 35 years of savings has gone in a couple of months."

John Wright, a retired joiner from Northampton, was recovering from heart surgery when he found out LCF was in administration.

"This was money for our grandchildren, we weren't going on fancy holidays or buying flash cars - my wife worked in BHS and saved her whole life, this is hard-earned money, we saved and saved and saved.
"I am devastated, I feel a complete fool. I was completely taken in by the marketing."

A series of web adverts promising 8% returns from secure ISAs were released and in addition a comparison website - run by a company with links to Surge - would compare the 1% and 2% return ISAs from high street banks with the investments at LCF.

LCF was authorised by regulator the Financial Conduct Authority (FCA) - but the FCA said the authorisation was to provide consumer financial advice, not the sale of bonds or ISAs.

The FCA subsequently ordered the advertisements should stop running.

Where did the money go?
In a letter to bondholders administrator Finbarr O'Connell said once the £60m to Surge was paid, returns of up to 44% would be required in order for LCF to make good on its promises.

Investors were told the funds - and therefore risk - would be spread across hundreds of companies but, according to Companies House records, LCF loaned money to 12 - four of which have never filed accounts, nine are fewer than three years old, and nine had loans from LCF in 2017.

Much of the cash was loaned to companies that then "sub loaned" to others. Bondholders have raised concerns about connections between the directors of companies that received money and those who ran LCF.

Who were the directors?

Michael Andrew Thomson, known as Andy Thomson, took over as the boss of LCF in 2015 and is also director of horse riding company GT Eventing.

Paul Careless is the majority shareholder of both Surge PLC and RPDigitalServices - the company that powered ISA comparison websites.

Christine Anderson put thousands of pounds into LCF. She runs her own business, a surf school in Devon.

"They have done very well out of hard-working people - a lot have put some or all of their savings into this company," she said.

"The directors and ex-directors are living the life of Riley from what I can see, with their helicopters, their horses and their properties.

"It is very sad that this could have been allowed to happen."

Christine Anderson put thousands of pounds into LCF. She runs her own business, a surf school in Devon.

"They have done very well out of hard-working people - a lot have put some or all of their savings into this company," she said.

"The directors and ex-directors are living the life of Riley from what I can see, with their helicopters, their horses and their properties.

"It is very sad that this could have been allowed to happen."

Let down by the regulator?

In December the FCA froze LCF's activities, pulled the adverts and in January found that LCF had "made communications in relation to its fixed rate ISA or bond which were misleading, not fair and not clear".

The FCA findings included that LCF's bonds did not qualify to be held in an ISA account and therefore investors were being misled by being told the interest they earned would be tax free.

The FCA said it was "unlikely" investors would be protected under the Financial Services Compensation Scheme (FSCS) but it was "for the FSCS to determine".

Independent financial adviser Neil Liversidge wrote to the FCA in 2015 warning it about the scheme.

Mr Liversidge said: "The way it was promoted, a great many people could have fallen for this.

"A client brought it to us but when we looked into it there was a lot of interconnection between the people they were lending to and the management of LCF themselves.

"We warned our clients off and the same day we wrote to the regulator raising our concerns about the promotion."

Ms Anderson said: "We feel let down - we trusted this company because they had been regulated and authorised - we then found that they weren't even allowed to manage ISAs.

"The FCA should have known that before they allowed us to buy these products."

What do those involved say?

A spokesman for Surge Financial said: "Surge has a number of clients and its fees for LCF are in line with the industry standard.

"LCF was an FCA regulated business and it signed off all marketing materials and financial promotions prior to publication as required by the Financial Services and Markets Act.

"Surge was a supplier of services used in relation to raising investment for LCF. It did not handle client money and had no involvement in the deployment of funds to borrowing companies."

Mr Thomson has not responded to BBC requests for comment.