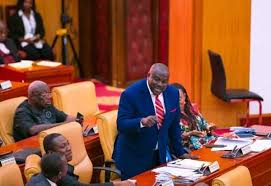 The Chairman of the Finance Committee of Parliament Mark Asibbey-Yeboah has defended the change of name by Agyapa Royalties limited from  Asaase royalties.

According to him, there is nothing wrong with the change of name.

The New Juaben South MP said the parliamentary committee asked owners of the company to change the name because there were too many other companies with similar name.

“So when it came to parliament, we decided to change the name. The decision to change the name from Asaase to Agyapa Royalties Limited was because there were so many mining companies with same name at the Registrar-General’s office,” he said.

He also dismissed the Minority’s basis for boycotting the passage of the deal.

“The Agyapa company is not 100% owned by the shareholders. Government of Ghana still holds 51%. We have seen so many things that didn’t have the blessing of the minority. It’s an election year and you don’t expect them to applaud gov’t for putting together such a beautiful deal”.

The act establishes the Minerals Income Investment Fund to manage the equity interests of Ghana in mining companies, and receive royalties on behalf of government.

The fund is supposed to manage and invest these royalties and revenue from equities for higher returns for the benefit of the country. The law allows the fund to establish Special Purpose Vehicles (SPVs) to use for the appropriate investments. Last month, government introduced an amendment to the act to ensure that the SPVs have unfettered independence.