Bank of Ghana suspends issuance of licences to microfinance companies 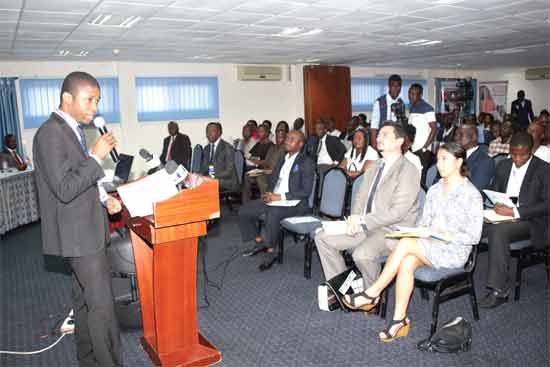 Mr Sampson Akligoh (left), Director of the Financial Sector Division of the Ministry of Finance, addressing participants the workshop in Accra.
Shares

The Bank of Ghana (BoG) has suspended the issuance of licences to companies that wish to operate as microfinance institutions. The decision forms part of measures aimed at bolstering efficiency in the industry.

The Head of the Financial Institutions Supervisory Department of the Bank, Mr Joseph Amoah-Awuah, made the disclosure at the sixth Annual General Meeting (AGM) of the Ghana Association of Microfinance Companies in Accra.Â

He said BoG would now focus more on rallying the existing licensed microfinance institutions to build on their capacities and foster strategic partnerships with the view to consolidating gains made so far.

In the early part of 2016, the industry saw the collapse of some microfinance institutions and saving clubs.

The BoG had revoked the provisional licences of 70 microfinance institutions, leading to panic withdrawals by some clients. The development also brought about investor agitation.

To assist institutions which were struggling in the industry, Mr Amoah-Awuah said the BoG was getting support from the World Bank to introduce a blueprint that would help resolve problems institutions in the banking sector and specialised deposit-taking industry were facing.

He said, the central bank had also strengthened its supervisory capacity and recruited 54 professionals who were attached to various microfinance institutions.

The move, he explained, was to narrow the supervisory span of institutions per each relationship manager.
â€œWe have also deepened our off-site surveillance and have introduced an electronic surveillance system, a platform meant to improve judgement in reportage and analysis, as well as eradicate errors associated with traditional e-mail attachment system previously in use,â€ he said.

He advised microfinance institutions to significantly reduce the incidence of non-performing loans ratio by adhering to the directive of registering credit and securities and seek reports on individuals and businesses applying for loans before they were approved and credits disbursed.

The Director, Financial Sector Division of the Ministry of Finance, Mr Sampson Akligoh, said a national financial inclusion strategy would soon be implemented.

He said the strategy would serve as an instrument for deepening financial inclusiveness across all sub-divisions of the financial sector, adding that it would also provide a coherent context for the operations of financial institutions that served the poor and financially excluded.

Mr Akligoh announced that the government had accessed some funds from the World Bank to support operators in the microfinance industry.
He, however, declined to give further details on the fund.

For his part, the Executive Secretary of the Ghana Association of Microfinance Companies, Mr Joseph Kwame Donkor, said the association had introduced a logo to help the public identify licensed institutions with ease.

He said in an effort to sanitise the microfinance industry, the association was going after illegal operators and was also introducing operating guidelines while building the capacities of registered operators.

The National Board Chairman of the association, Mr Collins Amponsah-Mensah, said since the association was formed six years ago, it had helped to bring financial services to the unbanked and created job opportunities for the unemployed youth.