Christine Lagarde: IMF chief convicted for negligence over use of public funds 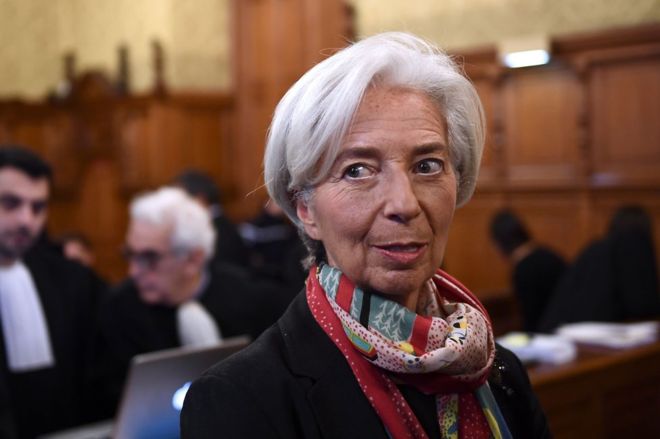 In what could be considered a trend among top officials of the international financial organization, a French court has found International Monetary Fund chief Christine Lagarde guilty of negligence but did not issue any punishment.

As finance minister of France in 2008, she is said to have approved the award of €404m ($429m; £340m) to businessman Bernard Tapie for the controversial sale of a firm.

Lagarde, who always declined wrongdoing, was absent in court, having left the French capital for Washington.

The IMF board is scheduled to meet "shortly" to deliberate on this developments.

On Friday, Lagarde told the trial she had always acted in good faith. It was gathered that Verdicts of the Court of Justice of the Republic (CJR) are not subject to appeal.

However, Lagarde's lawyer said his team would consider appealing.

Lagarde, had replaced Dominique Strauss-Kahn as IMF managing director in 2011 following the latter’s arrest in New York on grounds of sexual assault (charges that were dropped shortly after).

Just another of its top cadre members currently standing trial is IMF head, Rodrigo Rato of Spain on charges of misusing funds while serving as head of Spanish lender Bankia.

Lagarde, 60, was tried on charges of "negligence by a person in position of public authority".

Accused of allowing the misuse of public funds and not actual corruption, she probably could have been sentenced to at least a year in prison.

The CJR which is made up of mostly of politicians rather than professional judges, handles allegations of crimes committed by cabinet ministers in office.

The case traced to the early 1990s, when Mr. Tapie held majority shares in the sports goods company Adidas. After launching a political career and becoming a cabinet minister in Francois Mitterrand's Socialist government in 1992, Mr. Tapie had to sell the company.

In 1993, he filed a case against Credit Lyonnais, the state-owned bank which handled the sale, claiming that the bank had defrauded him by deliberately undervaluing the company.

By 2007, the long-running case was referred to binding arbitration by Lagarde, who at that time was finance minister under French’s conservative President Nicolas Sarkozy.

A three-member panel awarded the compensation a year later, resulting in a public indignation in France.

In 2015, eight years after of legal dispute, a French court ruled that Mr. Tapie was not entitled to a compensation and should repay the €404m.