Colombian airline Avianca files for bankruptcy in US court 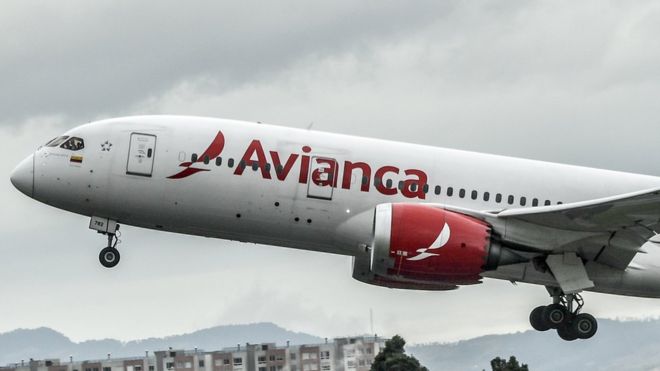 Colombia's national airline, Avianca, has filed for bankruptcy protection in a US court.

The carrier is the second-largest in Latin America, but its passenger operations have been grounded since March because of coronavirus.

It said the pandemic had cut more than 80% of its income, and it was struggling with high fixed costs.

If it fails to come out of bankruptcy, Avianca will be the first major airline to go under amid the pandemic.

In a statement, the firm said it had filed for Chapter 11 bankruptcy protection in a court in New York. The process postpones a US company's obligations to its creditors, giving it time to reorganise its debts or sell parts of the business.

Chief executive Anko van der Werff said the move was needed to ensure the New York-listed airline emerge as a "better, more efficient airline that operates for many more years".

More than 140 of its aircraft have been grounded since Colombian President Ivan Duque closed the country's airspace in March. Most of its 20,000 employees have been put on unpaid leave.

Behind KLM, Avianca is the second-longest continually running airline in the world.

It previously filed for bankruptcy in the early 2000s, and was rescued by a deal with Bolivian oil tycoon German Efromovich. The airline grew quickly under his stewardship, but its growing debt led to a successful boardroom coup against Mr Efromovich last year. It is now run by Kingsland Holdings.

The coronavirus pandemic has dealt a huge blow to the international aviation industry, as governments impose travel restrictions and confinement measures.

Global air travel has fallen by 90%, according to the International Air Transport Association. The body predicts Latin American airlines will lose $15bn (£12bn; €13.9bn) in revenues this year - the biggest drop in the industry's history.