Covid-19 : Check out how much govt is spending on free electricity for Ghanaians for three months 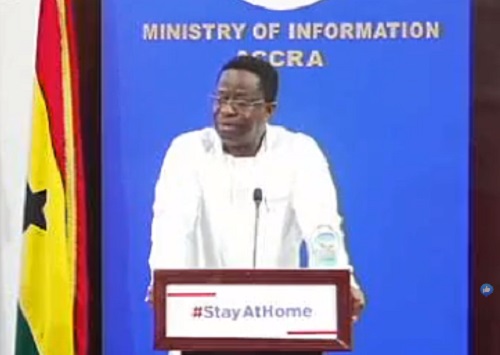 Minister for Energy Peter Amewu has provided a breakdown of how much the government will be spending on its free electricity for lifeline consumers and 50% for residential and commercial users.

President Akufo-Addo on April 9 announced that government will absorb 50% of the electricity bill for residential and commercial users in the country.

The President said the March 2020 bill will be used as a benchmark for the directive.

"We have decided on further mitigating the impact for all Ghanaians for the next three months, April, May and June, Government will fully absorb electricity bills for the poorest of the poor that is for all lifeline consumers. That is free electricity for persons who consume 0-50 kilowatts hours a month for this period, in addition for all other consumers, the residential and commercial government will absorb 50% of your electricity bill for this period using your March 2020 bill as your benchmark..."

At a press briefing today, April 16, Peter Amewu said the relief package will cost the government 1 billion Ghana cedis for the three months.

He explained what lifeline consumers are and the power distributors that fall under the directive.

READ ALSO :Â FreeÂ electricityÂ for the poor, 50% cut for others regressive - ACEP

"This applies to the Electricity Company of Ghana, ECG, Volta River Authority and also NEDCO. In Ghana, the consumption of power between 0-50 kilowatt-hour is defined by the PURC as lifeline consumption which is subsidized for low-income customers. A lifeline consumer can use one TV set, two light bulb points, a tabletop fridge and a fan for a limited number of hours."

"The ECG lifeline customers currently is about 1 million per the number of meters, the access rate is about 86% to 87% which means this percentage of Ghanaians are connected to the national grid."

Providing the breakdown for the lifeline and nonlife customers based on the distributors, Peter Amewu said ECG customers relief will amount to 732 million for the three months.

"The customer population of 1 million of ECG is about 27. 4% of the ECG total customer population, this means that at the current tariff level government is absorbing almost an amount of GHS 8.5 million per month, for nonlife customers of which 2,780, 886 are residential and 1,608 are... load customers, a 50% on their electricity bill will translate to GHS 235.4 million per month. The relief for ECG customers based on the estimated revenue is, therefore, GHS 244 million translating into GHS 732 million for three months"