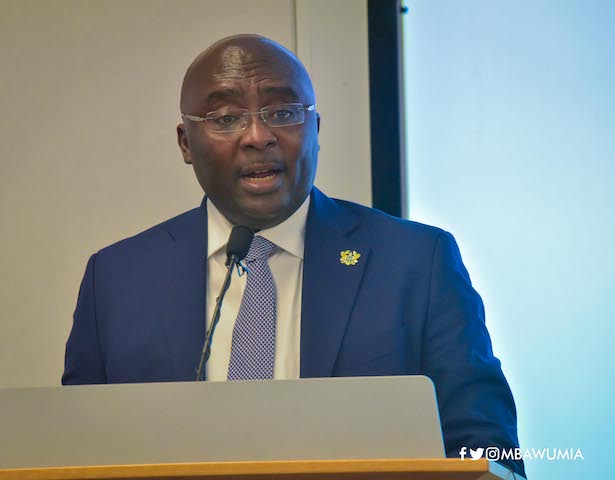 One of the key policy decisions of government most Ghanaians were looking forward to for the Vice President Dr Bawumia to comment on during his Economic Lecture on Thursday was the E-Levy.

But Dr. Bawumia was silent on the controversial Electronic Transfer Levy (E-levy).

The only time the Vice President came close to mentioning the tax policy was when he was talking about taxes and levies abolished and reduced by the Akufo-Addo government within the last five years.

Dr. Bawumia said the Akufo-Addo government has either reduced or abolished 18 taxes and levies and explained that they reduced the E-levy charge rate from 1.75% to 1.5%.

“The introduction of an E-Levy of 1.5% on electronic financial transactions,” he said.

The Vice-President is on record to have opposed any taxation on Mobile Money (MoMo) transactions suggesting that such a move will impoverish the average Ghanaian.

It, therefore, became a surprise to many that his government introduced the tax measure amidst huge public resistance to the policy.

Ghanaians were thus looking forward to his take on the E-levy following its controversial passage in Parliament and expected implementation in May 2022, but their expectations were not met as the Vice President failed to make any clear comment in that regard.

Despite concerns with the drop in the value and volume of mobile mobile money transactions in Ghana, Dr. Bawumia maintained that Ghana has the fastest growing mobile money market in Africa.

Prior to the implementation of the E-levy, data from the Bank of Ghana shows a decline in MoMo transactions and interoperability in the past few months.

He insisted that Ghana is the first country to achieve a fast growing MoMo interoperability in the whole of Africa.

E-levy will be a tax on electronic transactions, which includes mobile-money payments.

The charge will apply to electronic transactions that are over GH¢100 on a daily basis.