Ghana bans importation of poultry products from UK, other countries 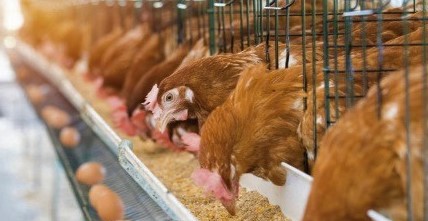 Ghana through their Ministry of Food and Agriculture has banned the importation of poultry products from Netherlands, Germany, Russia, Denmark and the United Kingdom.

This follows the outbreak of Highly Pathogenic Avian Influenza subtype H5N8 in those countries.

The ban is being implemented with immediate effect.

Some products to be affected by the ban include day-old chicks, hatching eggs, frozen chicken, poultry products and poultry feed.

This was contained in a statement signed by Robert P. Ankobiah, acting Chief Director of the Ministry, on behalf of the Minister of Food and Agriculture, Owusu Afriyie Akoto.

“Following a confirmed outbreak of Highly Pathogenic Avian Influenza subtype H5N8 in the Netherlands, Germany, Russia, Denmark and United Kingdom, the Ministry of Food and Agriculture upon advice from the Veterinary Services Directorate has placed a ban on the importation of day-old chicks, hatching eggs, frozen chicken, poultry products and poultry feed from these European countries with immediate effect.”

Robert P. Ankobiah, in the statement, announced that all import permits that were issued earlier for such consignment have been rendered invalid due to the new directive.

“Importers are to note that all imports permits that were issued for such consignments from Nertherlands, Germany, Russia, Denmark and United Kingdom have been rendered invalid with immediate effect,” the statement added. 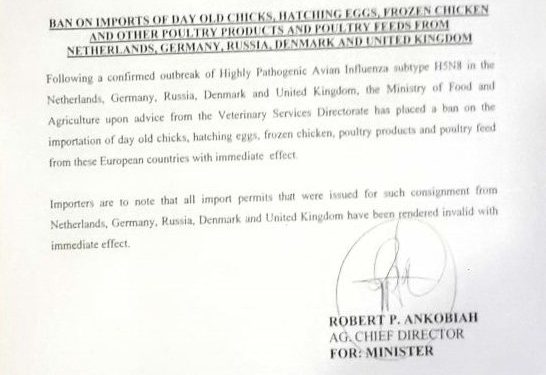