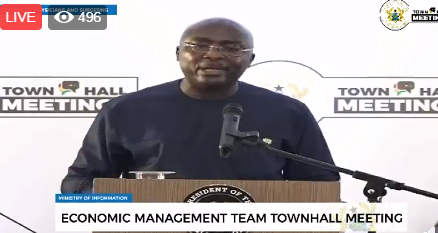 Vice President and the head of the Economic Management team Dr Mahamudu Bawumia has given reasons why the cedi depreciated from January to March this year.

Speaking at a town hall meeting in Accra to address issues regarding the economy, Dr Bawumia said the seven action plan given to the country by the IMF, which was to be completed by March this year, was the caused of the Cedi depreciation.

The Ghanaian Cedi has been depreciating against major trading currencies for the past few weeks. On Wednesday, February 20, 2019, the Cedi is trading at 5.25 against the US Dollar.

Due to this, some industry players have called on the Central Bank to put in more dollars to ease the pressure of doing business in the country.

But explaining the current depreciation of the Cedi Director of Treasury at the Bank of Ghana, Stephen Opata said some key factors are making it difficult for the cedi to be stable in the past weeks.

Comparing the trend of depreciation from 2018 to January 2019 he said: "as at the end January, approximately the cedi has depreciated by 3.6 per cent if you compare it to the same period in 2018 it's a slight depreciation of 0.1 per cent, and this means the trend can be reserves subject to significant foreign inflow and other factors.

Outlining the factors, Stephen Opata said the depreciation of the cedi last year was mainly driven by external development as well as some domestic pressure from the corporate and energy sectors and more recently re-alignment of the rate in the market.

"First is our foreign exchange cover from non-resident investors, repatriation of coupon payments and bond maturities, we have a significant international investor base who invest in our bonds and when coupons are due and the banking system is not able to meet the foreign demand to repatriate the coupons and maturity, then sometimes they will have to fall on the central bank and we use our reserve to meet that, an important source of pressure is also from the energy sector especially independent power producers obligations and oil import."