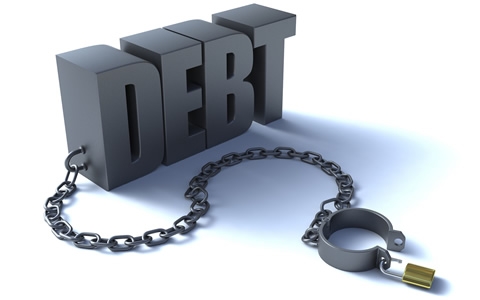 This was contained in the November Bank of Ghana’s summary of financial and economic data released after the Monetary Policy Committee met this week to review the ” health” of the economy.

The GH¢208.6 billion total debt stock puts the country’s Debt-to-GDP Ratio at 60.3 percent ending September. ¢107.2 b of the debt came from loans taken from outside the country by government, this is about $ 20.1b

This constitutes about 31.1 per cent of the total value of the economy.

Domestic debt stands at ¢101.4 b representing 29.4 per cent of the total value of the economy.

Reasons for the debt stock increase?

The increase in the debt stock over the last two months can be attributed to the cedi’s marginal depreciation and recent funds advanced towards the cleanup of the banking and non-banking sectors of the economy.

Based on estimates outlined in the 2019 Supplementary Budget, the cost the total cost of the financial sector cleanup could reach ¢21b by the end of 2019.

This was after the finance minister, Ken Ofori-Atta projected in the budget that the clean-up could reach $3 to $4 billion by the end of 2019.

The Finance Minister Ken Ofori in the 2020 Budget presentation updated the numbers. He noted that the total estimated cost for the government’s fiscal intervention, excluding interest payments from 2017 to 2019 was estimated at ¢16.4b

The country’s debt in ‘context’

How much does every Ghanaian owe?

Some analysts have even argued that Ghanaians could be paying for this cost in the form of taxes.

Impact of rising debt stock on the economy

For some, the impact would be on Ghana’s debt servicing bill. According to the 2019 Budget government is planning to set aside ¢18.6b just to pay for the interest of funds borrowed.

In the 2020 Budget, the finance minister Ken Ofori is projecting that interest payment would hit ¢ 21.7 b

Again if the economy does not expand to accommodate these rising debt, it could impact negatively on the country Debt-to-GDP Ratio, which currently stands at almost 60 %.

Some analysts have also warned that if these funds are not being invested in sectors that would pay back for itself in the future, then the country could be sitting on a time bomb.

Some economists have also argued that since Ghana has not defaulted on its debts commitment in recent times, then investors may not react negatively to these debt numbers.

The current administration on the other has also argued that in discussing these numbers, we should look at the how they have been able to grow the economy to absorb this debt by looking at the Debt to GDP ratio.

From the data, Ghana's earnings from the exports sector are picking up strongly.

Gold brought $5.2 b, cocoa was $1.6 b while earnings from crude oil exports were $3.8 b. The data showed that with the exception of Gold, all the other traditional exports did not witness any significant improvement.

On imports, the country spent $11.1 b to finance Ghana’s imports ending in October 2019.

Non-oil imports accounted for $ 9.3 b in October 2019, while $1.8 b went into financing the country’s oil imports, however, this remains a decline, compared to what was recorded in the same period last year.

Ghana’s Gross International Reserves as at the end of October 2019 was $8 b, representing 3.9 months of import cover. While the Net Reserve Position was a little over $4.7 b.

The Bank of Ghana puts the cedis' rate of depreciation for the first 11 months of this year at 10.37 per cent.

Total assets in the banking sector ending October stood at GH¢121b compared to the GH¢106 b in the same period last year.

However, the rate of growth slowed, it was 13.8 per cent, compared to 19.6 per cent in the same period last year.

Total Advances by banks was ¢ 48.8b ending October, representing 16.8 per cent jump from what was recorded in the same period in 2018.

Active mobile money agents according to the Bank of Ghana was also a little over 20 thousand for the first 10 months of this year , while active registered accounts was 3.1 million.