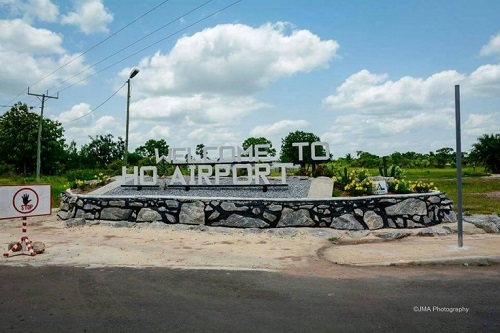 The Volta Regional Minister, Dr Archibald Letsa says the operationalisation of the newly built Ho Airport will bring economic gains to the country.

In an interview with Citi FM, Dr Lesta noted that with the different establishments in the regional capital the Ho Airport will not be a waste of money for the country.

"I believe the market is here for people to fly to Kumasi, Tamale and Accra but these are decisions to be made by private businesses and we are trying to talk to them. Imagine we have a 50 seater aircraft flying between Ho and Accra or Ho and Kumasi, we have a lot of public servants here, a lot of private businesses who go to Accra, they spent two hours on the road to Michel Camp and other two hours to Accra, if I am a businessman the fuel that I'm going to burn on that road if I take a flight from Ho to Accra by 6 am in Ho and I'm in Accra 6:20 am I transact my business get back to the airport and I'm back to Ho in a few minutes, we also have universities here and other establishments in the regional capital so I don't believe that if we have an airline in Ho cannot get 50 to 60 people boarding that particular plane.."

He explained why Ho Airport has not yet been operationalised after completion of work in April last year.

"The airport was completed in April last year by the contractors and a lot of inspections have gone on to operationalized the Ho Airport, we've had a series of visit by the Minister for Aviation and the Ghana Civil Aviation Authority and the Ghana Airport Company as at now Ghana Airport Company has taken over the airport, there is still some few things, navigational equipment that has to be fixed but basically the airport has been put up using the taxpayers money and as a government we have to do the best we can to operationalised it, efforts have been made to talk to the local airlines to start flights to Ho but failure of which we are hopeful that when the national airline takes off we are going to have a flight to Ho.."

Contractors working on the Ho Airport have handed over the facility to the government for onward commissioning.

The contractors, Amandi Holdings, has completed all major construction works on the facility. Former President John Dramani Mahama broke grounds for the project in 2015.

The 1,500acre land secured at Ho- Tritrinu for the construction of the aerodrome is to aid aircraft activities in the region.
Although scheduled to be completed in 2016, the project suffered a little delay after the change of government in 2017