Minority MPs to block the approval of  Minister-designate for Employment, Ignatius Baffour-Awuah 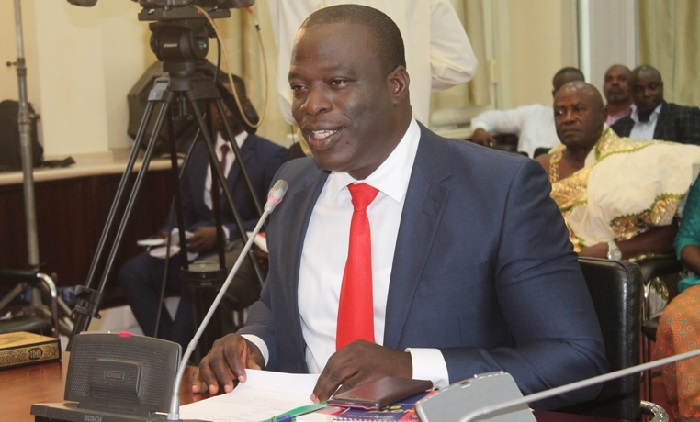 Some Minority MPs say they will block the approval of the Minister-designate for Employment and Labour Relations, Ignatius Baffour-Awuah.

According to them, unless the Minister-designate provides evidence to back his claim that the government has created 3 million jobs in the past four years he will not be approved.

Member of the Appointments Committee and MP for Bodi Sampson Ahi said it will be in the best interest of the minister to do so.

"I think it will be in the interest of the minister to make that information available to the committee because his approval will be hinged on his ability to submit that document. If he has not submitted that document I'm not sure we will approve him.

The Minority is demanding a detailed breakdown of the over 3 million jobs government claimed it has created under the Akufo-Addo administration in its first term in office.

Their demands follow a disclosure made by the Minister-designate for Employment and Labour Relations, Ignatius Baffour-Awuah that government as of September 2020 had created a total of 3 million jobs for Ghanaians.

Mr Baffour-Awuah who was responding to a question during his vetting indicated that the jobs created comprise both public and private sectors of the economy.

“On the number of jobs, yes it is true on 1st May 2018 I indicated that the government of Nana Addo Dankwa Akufo-Addo had created approximately 1 million jobs, even though I don’t have the exact figures for the end of 2020, the last time we reported on was in September 2020, and the figure was around 3 million jobs,” Baffour-Awuah told the Appointments Committee of Parliament.

But in a sharp rebuttal, the Minority Leader who doubles as the ranking Member on the Appointments Committee, Haruna Iddrisu demanded a breakdown of the said jobs created by the Akufo-Addo government.

“Minister-nominee can you state how was the 3 million jobs created and the distribution, you want to share the statistics with us, sector by sector,” Haruna Iddrisu quizzed.

In response to Haruna’s demands, the minister-designate promised: “Hon. Chair, I will make the details available to the committee when I get back to, I have on a number of occasions even come to this House and have given this figures out already but if it is at the pleasure of the committee to have the details, I am more than willing to do so”.

Samson Ahi demanded clarity on the jobs created by the Akufo-Addo’s government after he alleged that Vice President, Dr Mahamudu Bawumia on August 13, 2020 said that government has created 2 million jobs contrary to the 3 million jobs stated by the Minister-designate for Employment and Labour Relations.

But Baffour-Awuah stated that he is unaware of the said figures channeled out by the Vice President as claimed by Samson Ahi.

“I don’t know and I am not aware of what you’re talking of but I have officially turn out the 3 million jobs and I will be prepared to defend the 3 million at any point in time that I get the opportunity,” Baffour-Awuah stressed.

Mr Iddrisu subsequently demanded that the minister-designate for Employment and Labour Relations furnish the House with details of the jobs created within the public and private sectors during the president’s first term in office.

Baffour-Awuah later assured the committee to furnish them with the details by the close of Wednesday.