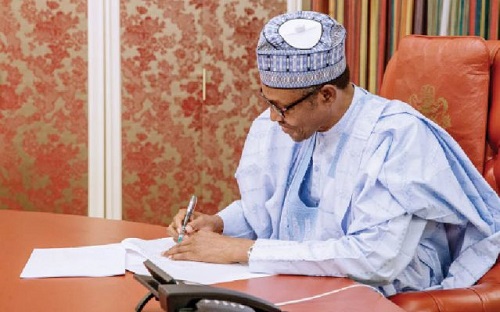 African superpower Nigeria has signed an agreement which aims to increase trade between African countries.

This leaves Eritrea as the only African country not to be part of the trading bloc.

The first step is to cut tariffs for goods from countries within the bloc but the timeframe to do this is yet to be announced.

It also estimates that implementing AfCFTA will lead to around a 60% boost in intra-African trade by 2022.

At the moment some of that intra-Africa trade ranges from fresh fish from the Seychelles to petrol from Angola.

Why is it a big deal that Nigeria signed up?
By Mayeni Jones, Nigeria correspondent

AfCFTA hit a hurdle last year when Nigeria pulled out days before the country was due to sign the agreement.

Nigeria is Africa's biggest economy and has long been a regional leader so, when it stalled, observers questioned if the African trade bloc would ever actually happen.

Since then, the Nigerian Office for Trade Negotiation says it has consulted with 27 groups, including trade unions.

Nigeria has a lot to gain from increasing access to its goods and services to a wider African market. But many of those consulted also feared increased regional integration would lead to unfair competition for jobs and the goods they produce.

With Nigeria signed up, AfCFTA's dream of increasing intra-Africa trade, which currently lags behind the volume of trade the continent does with Europe, is now one step closer.

Now that AfCFTA can offer access to the enormous Nigerian market, they are in a much stronger position to negotiate with regional bodies in other parts of the world.

Why was Eritrea left out?

Eritrea did not participate in the negotiations because of their conflict with Ethiopia, according to the Commissioner for Trade and Industry of the AU Commission Albert Muchanga.

He adds that now the two countries are at peace and Eritrea has asked the AU to go through the agreement with them.

"So over time they are going to come on board" he said.

What are free trade agreements?

Tariffs are a form of tax, like a border tax.

They are placed on goods coming into a country for a range of reasons, sometimes to try and protect a home-made product.

They get rid of quotas too, so there is no limit to the amount of trade you can do.

FTAs also help make a country's exports cheaper and give easier entry to other markets.

They come in all sorts of forms and with different rules but in short, they make trade between countries as liberal as possible and allow for more rules-based competition.