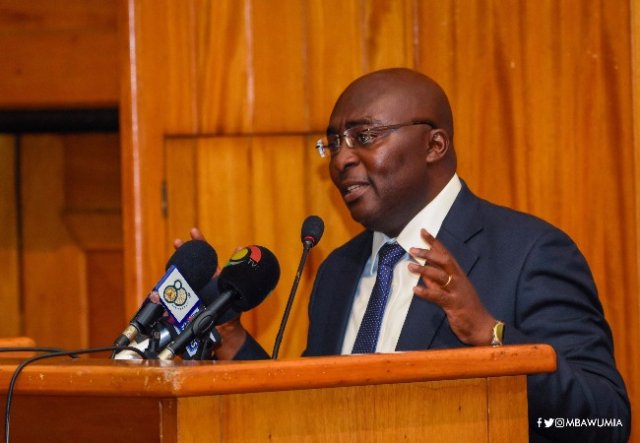 Vice President, Dr Mahamadu Bawumia has revealed that so far some 350,000 workers including 54,000 health workers, 45,000 teachers and 100,000 Nation Builders Corp (NABCO) personnel have been recruited into the public sector in the two years of the Akufo Addo led National Patriotic Party (NPP) administration.

The Vice President said this when he joined Muslims during separate Friday prayers at Bawjiase, Agona Nyakrom and Gomoa Mangoase central Mosques, all in the Central Region, to offer prayers for peace and divine wisdom for the President and his team in their quest to develop the country.

The visit, he explained, was motivated by the fact that God quickly answered the prayer request of believers especially during the period of Ramadan.

Dr Bawumia assured them that the Government had engaged the services of 3,000 Arabic teachers while clearance was being sought for more to be employed to enhance the teaching and learning of Muslim students.

According to the Vice President, the establishment of the Zongo Development Fund (ZIDF) was one of the numerous social intervention instituted by the Government to bring about inclusive transformation in the country.

Also, lepers were to be included in the Livelihood Empowerment Against Poverty (LEAP) programme under the inclusive policy, Dr Bawumia indicated and encouraged all Muslims to take advantage of the Government’s free Senior High School (SHS) programme to educate their children.

Electricity is being subsidised by 17.5 per cent for domestic users and 30 per cent for commercial users by the Government, which had also reduced the import tax by 50 per cent.

The Vice President called on Muslims to continue to pray fervently for the leadership of the country and live in peace and harmony with one another.

Mr Abass Wilson, the General Secretary of the Ahmadiyya Muslim Mission, Ghana, on behalf of the Muslims at Gomoa Mangoase thanked the Vice President for the gesture and assured him of their support and prayers.