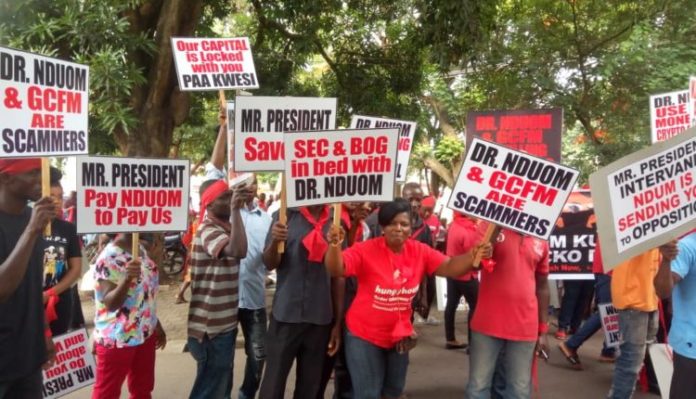 The aggrieved customers said the 22 companies currently under official liquidation is insignificant as clients of the companies form only a minority of the total customer base.

Secretary of the coalition Joseph Ayitey said the impression being put out there by the government that they are paying cannot be true because in actual fact they are paying less than 5% of the customer base.

"You see what we are pushing out is that if the government intends to pay and they genuinely want to pay they should come out with a plan on how to pay all these customers. We are not saying that those they intend to pay they shouldn't pay them, when you have a situation where Gold Coast Fund Management Company holds the majority in all that is going on it is just fair that their focus should be on the majority of the customers like I pointed out to you those 22 companies they don't even form more than 5% of the total customer base."

The Securities and Exchange Commission, SEC has in a statement revealed that government will from September this year announce details of the payment process of clients of defunct Fund Management Companies.

This according to the statement forms part of the government's bailout package for clients of the 53 defunct Fund Management Companies.

The package will be given in phases with the first phase covering clients of the twenty-two (22) companies currently under official liquidation.

A statement issued by the Securities and Exchanges Commission explained that the Official Liquidator, the Registrar General, will communicate details of the payment process to affected clients starting in September 2020.

“Prior to the Official Liquidator realising value from assets, the Government, mindful of the plight of Investors, has reiterated its commitment to a bailout package for clients of the FMCs in the form of a social intervention similar to what was done for depositors of the failed SDIs and MFIs.”

“The first phase will cover clients of the twenty-two (22) companies currently under official liquidation per Court orders, based on their validated claims. The Official Liquidator will communicate details of the payment process to affected clients starting in September. The second phase would cover clients of the remaining companies after the liquidation orders are secured,” the statement noted.