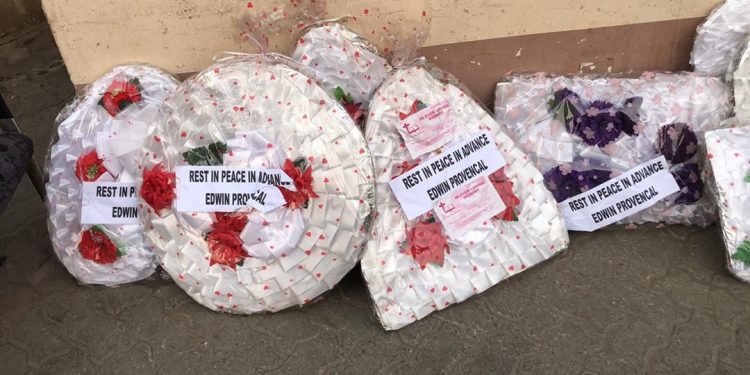 Staff of Bulk Oil Storage and Transportation Company Limited (BOST) have been rattled by burial wreaths laid by an unknown person or group for Managing Director, Mr Edwin Provencal.

The burial wreaths were laid in front of the head office building in Accra last week.

The wreaths were neatly placed with the inscription, “RIP Mr Edwin Provencal,” others read “Rest well”.

Mr Provencal has described the incident as strange but perfectly understandable.

He is convinced the wreaths are meant to discourage his clampdown on corruption at the government agency.

BOST has in the past been embroiled in many corruption scandals.

“Lately, transport owners’ activities on the adulteration and tampering of seals which is curbed by BOST and the National Petroleum Authority (NPA) has made us targets”, he said.

Meanwhile, the Governing Board of BOST has said security agencies have begun investigations into the laying of wreaths at the entrance of its head office last week.

BOST has thus asked its management and staff to remain calm as investigations continue.

“The Board would like to use this opportunity to inform all stakeholders that the incident has been reported to the appropriate security agencies for investigations to be conducted.”

“Pending the outcome of the investigations, the board entreats Management and Staff of BOST to remain calm and to refrain from granting further interviews which may cast aspersions on any person or group either within or outside of BOST,” portions of a statement signed by BOST said.