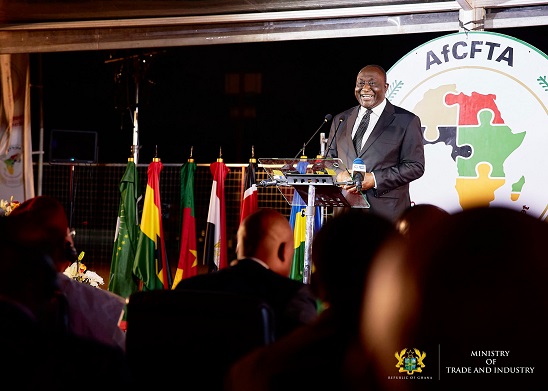 Minister of Trade and Industry Alan Kyerematen has called on governments of African countries to put in place the needed institutional and logistical support frameworks to ensure that they collectively reap the full benefits from the implementation of the African Continental Free Trade Area agreement.

Speaking at the launch of the Africa Guided Trade Initiative in Accra, the Minister stressed that “at our national levels, we should have institutional structures and a programme of action for boosting intra African trade to enable entrepreneurs to produce to take advantage of the huge market provided by the agreement. We must ensure that we have the logistics support to ensure that we are able to move the goods from one country to another”.
According to Ghana's Trade and Industry Minister, the launch “symbolizes that AfCFTA is not just on paper but a reality. And we are moving from talk and negotiations to action. It also symbolizes that governments in Africa who have been involved in the negotiations are now giving way to the private sector to make it a reality".
READ ALSO: Trade Ministry engages stakeholders on implementation of Textiles Tax Stamp policy
The guided trade initiative was launched for seven member countries. These seven countries which have signaled their readiness to start trading under AfCFTA were Tanzania, Mauritania, Kenya, Egypt, Cameroon, Rwanda, and Ghana.
Speaking at the same event, Secretary-General of the AfCFTA Secretariat, Wamkele Mene said at least 96 different products from the seven countries could be freely traded under the rules of AfCFTA.
Products approved to trade under AfCFTA include horticultural products, pharmaceuticals, rubber, aluminum kitchenware, sugar, steel, and wooden products. These products originating from Africa will enjoy duty-free and quota-free trading among the partnering countries.

"This is the moment the founding mothers and fathers of the Organization of African Unity have longed for. We have finally honored and made reality the vision of those who liberated our continent". We are connecting East Africa to West Africa, North Africa to Southern Africa. Trade will be the driver of inclusivity, creating opportunities for young Africans. So we have taken the first journey today, and I hope in 15 years, we will have succeeded in lifting millions and millions of Africans out of poverty", said Mene.