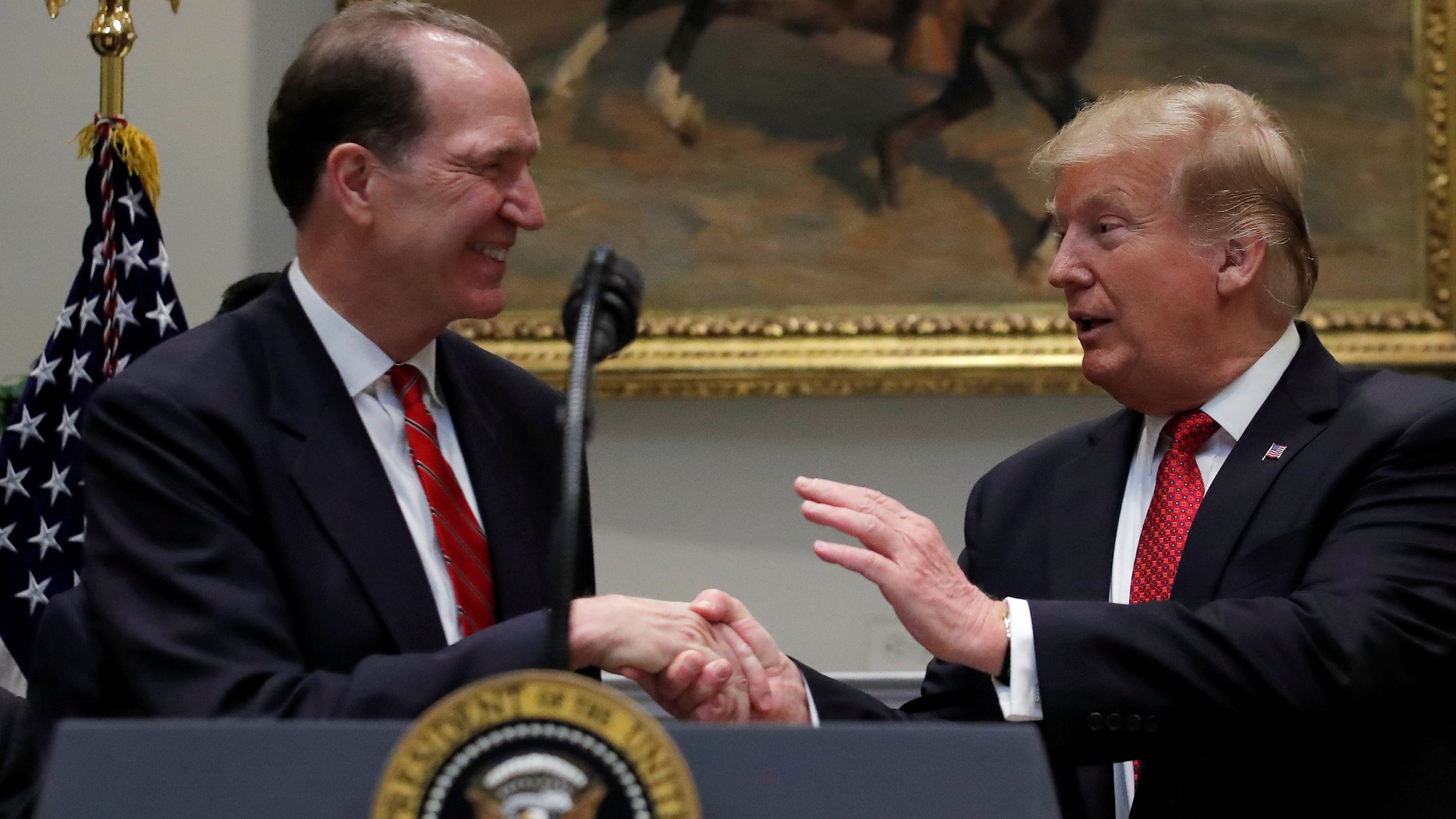 His nomination has stirred debate, as some worry that Mr Malpass, a critic of the bank, will seek to reduce its role. White House officials said Mr Malpass, a long-time Republican, would be a "pro-growth reformer".

If approved, he is expected to push the bank to narrow the focus of its lending to the world's poorest countries, among other changes.

At a press conference in Washington, Mr Trump praised Mr Malpass as a "strong advocate for accountability at the World Bank for a long time".

The president, who frequently criticises multilateral institutions, said he expected Mr Malpass to ensure that the bank's dollars "are spent effectively and wisely, serve American interests and defend American values."

Who is David Malpass?

Mr Malpass, a Trump loyalist, was a senior economic adviser to the US president during his 2016 election campaign.

He has served as the Treasury Department's undersecretary for international affairs since August 2017. The 62-year-old has criticised the World Bank, along with other institutions such as the International Monetary Fund, for being "intrusive" and "entrenched".

He has also pushed the bank to reduce its lending to China, which he says is too wealthy to deserve such aid, and deploys harsh practices when lending to other countries. An American has led the World Bank since its start in the 1940s, when it was created to help rebuild Europe in the aftermath of World War II.

The US, the bank's largest shareholder and a major source of its funding, has traditionally held sway over the selection process for president. However, there has been increased pressure to diversify the bank's leadership, reflecting the economic rise of other countries in recent decades.

It is not clear if other countries will propose alternatives to challenge Mr Malpass. The World Bank, which has 189 members, is accepting names until 14 March and plans to create a shortlist of up to three candidates for interviews.

Its executive board plans to vote on candidates for the post of president before its April meeting. The US controls 16% of the 25-member executive board's voting power.

European shareholders, who control another significant chunk of voting power, are also unlikely to block the pick, according to Reuters.

He will also oversee implementation of reforms the US pushed last year, which coupled an increase in money for the bank with changes aimed at reducing lending to China.

Officials said Mr Malpass's nomination did not signal a lack of support for the bank, which helps finance development projects with loans, credits and grants, committing more than $60bn (£46.3bn) in its most recent financial year.

However, they said the administration did want to see changes to make it more effective. "Sometimes that does require real reform and modernising ways of doing business," a senior administration official said during a background briefing with reporters.

If approved, Mr Malpass would replace Jim Yong Kim, a doctor and former president of Dartmouth University, who unexpectedly resigned last month. Mr Kim, whose tenure had been rocky, is joining a private equity fund.