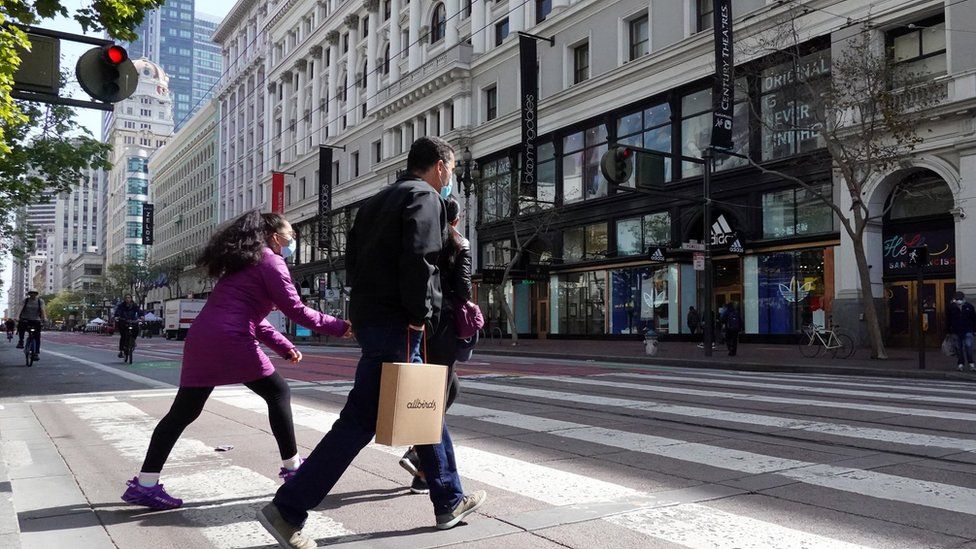 Hiring in the US remained strong in April despite concerns that fast rising prices and other economic disruption could lead to slowdown.

The gains were bigger than expected, marking the 16th month of expansion.

The growth is likely to bolster views at the US central bank that the economy is well positioned as it starts to raise rates to try to curb inflation.

"It keeps them on track," said Kathy Bostjancic, chief US economist at Oxford Economics.

The US economy has recovered more quickly than many expected after shutdowns in the early months of the pandemic wiped out 22 million jobs.

Across the economy, businesses have struggled to find workers to meet demand, pushing them to raise wages at the fastest pace in years. Average hourly pay was up 5.5% year-on-year in April.

Wesley Davis, a 35-year-old project manager in the tech field in Colorado, said it took him just three and a half weeks to find a new job after he started to look earlier this year.

More than a hundred messages from recruiters poured in after he updated his professional profile online to signal he was looking for work. And he said companies didn't balk when he presented his salary requirements - and warned he was only interested in jobs offering the ability to work from home.

Ultimately, he said, he managed to nearly double his pay.

Wesley said the pandemic had shifted conditions for workers, creating more opportunities by expanding remote positions and spurring people to quit jobs at historically high rates in what has become known as the Great Resignation.

"Anyone who's experienced, I'm encouraging to look for work because compensation offers for experienced professionals are drastically high compared to where they were," he said.

2px presentational grey line
Wages have not, however, risen as fast as other costs. Inflation in the US jumped 8.5% in March, driven by climbing prices for energy, food and other products.

On Wednesday, the US central bank announced its biggest interest rate increase in more than two decades to try to rein in the increases, lifting its benchmark interest rate by half a percentage point, to a range of 0.75% to 1%.

But with central banks around the world making similar moves, analysts are worried the shift in policy may lead to a sharper slowdown, especially as the war in Ukraine and recent Covid shutdowns in China present new economic challenges.

On Thursday, the Bank of England warned of a slowdown in the UK, saying it expected consumers to cut spending as rising prices eat away at their purchasing power.

In the US, Federal Reserve chairman Jerome Powell said the tight labour market - in which openings outnumber available workers by nearly two to one - was a sign there was room to reduce demand, without inducing a sharp downturn.

He said wages were rising far more quickly than would be consistent with the bank's 2% target for inflation.

Friday's report may deepen his concerns, Ms Bostjancic said, pointing to figures that showed the number of people in the labour force - working or looking for work - fell by more than 360,000, the first decline in months.

"The disappointing part was supply contracted," she said. "That's critical because if there is going to be some kind of cap or tempering of wage pressure, you need to see labour supply continue to come online."

However she and other analysts cautioned against reading too much into the figure from just one month, saying they expected more people to return to the workforce, as wages rise and health worries abate.

Restaurants, bars and manufacturers led hiring in April, which occurred across all sectors of the economy.

"Admittedly, we expect employment growth to slow this year, but fears of an imminent recession, which have been amplified by the latest bout of weakness in equities, are overblown."