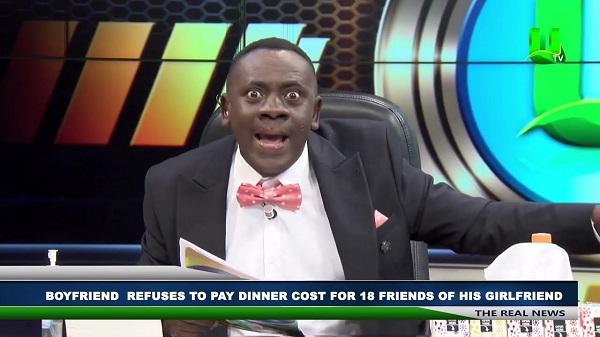 Popular Kumawood actor, Akwasi Boadi also known as Akrobeto had revealed that since stepping foot into Accra some forty-three years ago, he has never paid rent.

According to the award-winning Television Presenter, his humility has given him a lot of opportunities that he would have never dreamed of, coming from a very poor background.

Akrobeto in an interview with Precise FM narrated his journey to Accra, disclosing that he was brought to the city by Apostle Kwadwo Sarfo.

He added that he lived with the popular engineer for a very long time and he never asked for anything in return.

”I’ve lived in Accra for 43 years now, no rent. The secret is from my father Apostle Kwadwo Safo,” he said.

Akrobeto also shared that even after moving out of Apostle Safo’s house years later to live on his own, his landlords never took a dime from him as rent.

“I didn’t have anything of my own. My family was very poor. When I completed Form 4 in the year 1979, Apostle Kwadwo Sarfo sent someone to come for me from my village to stay with him in Accra. And I stayed with him for a very long time without paying a dime because of my humility and honesty. Even in times when I moved out, anytime, I pay rent, strangely, the landlords either return my money or refuse to accept it,” he stated.

Akrobeto is also known in showbiz as 'who knows tomorrow'.

He was born on the 18th of November 1962 at Akyem Ayerebi in the Eastern Region of Ghana.

He started his basic school education at Akyem Ayerebi L/A primary and Middle School and completed in the year 1979.

Even though he could not pass his middle school examination, his love for comedy and acting made him popular and loved by a lot in his community.

At age 18, he left his hometown to Accra with Apostle Kwadwo Safo of Kristo Asafo Band, when the band visited Akyem Ayerebi to perform their usual concert party in the town.

He remained with the Kristo Asafo band and performed in several other productions in the 2000s at the popular Keysoap concert party “who is who” competition in those days.

Akrobeto entered into mainstream acting for screens around 2009 and has remained relevant in the acting industry especially in the Kumawood movie industry till date.

He's featured in several television commercials and TV series in Ghana and has played some indelible roles in most of them.

Affectionately ridiculed with his obvious big nose and ears Mr. Who Knows Tomorrow has to his credit several awards with most prominent ones being the overall Best Actor Awards, by Ghana Movie Award and Kumawood Award.

He has also won Best Supporting Actor several times in countless number of movies in the industry.

He’s acted in over 500 movies with majority of them being Akan movies(Kumawood).
He joined DESPITE MEDIA(UTV) as the host of the popular entertainment news program the ‘REAL NEWS’ in 2018 and has since remained with them, while still active in the acting industry of Ghana.

He likes to watch football and he's blessed with three strong boys as his biological children.