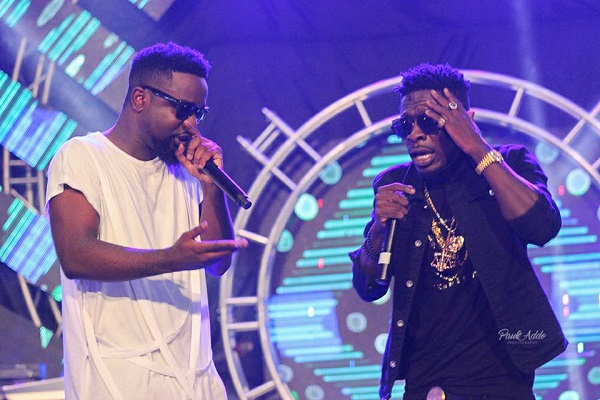 Shatta Wale and Sarkodie seem to have solved their differences after the former wished the latter a happy birthday today July 10, 2020.

For many music lovers of Sarkodie and Shatta Wale, they canâ€™t seem to get the real cause of their rift but all they know is the latter has described the former as a pretender who does not speak the truth as it is.

Today on Hitz FM, Shatta Wale buried their differences and wished the rapper a happy birthday, he also promised to get him a cake.

Shatta Wale recently on UTV said he was working on featuring Sarkodie in his yet to be released album gift of God.

Shatta Wale previously accused the â€˜Canâ€™t let you goâ€™ hitmaker of betraying him after claiming Sarkodie went behind him to take an offer by an international company who had booked them for a performance outside Ghana.

According to Shatta Wale, he and Sarkodie had agreed on an amount to charge the company but Sarkodie stepped out to take a lower amount to perform breaking their agreement.

Sarkodie, after many months of keeping mute broke silence with a song that arguably took the â€˜Melissaâ€™ singer to the cleaners.

Sarkodie released â€˜Adviceâ€™ in 2018 which was to address the numerous rants by Shatta Wale against him although he did not mention his name in the song.

In his bid to settle the score between them once and for all, he jabbed Shatta Wale over his arrogant and boastful lifestyle and the fact that he always want to hit at his own colleague yet he calls for unity.

According to Sarkodie in his â€˜Adviceâ€™ song, whilst Shatta Wale is busily taking shots at other musicians he is occupied with helping other acts to join him at the top which made sacrifice his own career for some time.