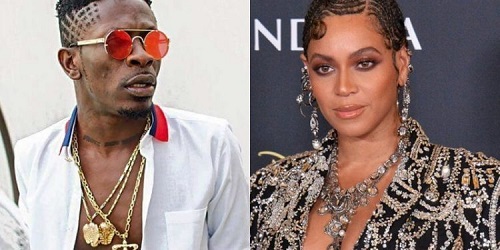 Dancehall artiste Shatta Wale has been featured on Beyonce’s new album, The Lion King: The gift.

The album is inspired by the remake of Disney’s Lion King in a non-animated version in which Beyonce played the role of Nala.

Taking to Twitter to share the news, the ‘My Level’ hitmaker posted a photo of the tracklist with his name circled. He tagged Beyonce on the post.

In addition, there’s a song with JAY and Bey’s daughter Blue Ivy Carter. Check out the cover art at Beyoncé’s website.
The Lion King: The Gift, executive produced by Beyoncé, is out this Friday, July 19 via Parkwood Entertainment/Columbia Records.

The soundtrack to The Lion King arrived last week. As with The Gift, it includes Beyoncé’s new song “Spirit.” The CGI live-action remake of The Lion King hits theatres July 18.

Beyoncé said in a statement the collaborations with African musicians were important because the film is set in Africa and “authenticity and heart were important to [her].”

“This is a new experience of storytelling. I wanted to do more than find a collection of songs that were inspired by the film. It is a mixture of genres and collaboration that isn’t one sound. It is influenced by everything from R&B, pop, hip hop and Afro Beat.”

“I wanted to put everyone on their own journey to link the storyline,” she continued. “Each song was written to reflect the film’s storytelling that gives the listener a chance to imagine their own imagery, while listening to a new contemporary interpretation. It was important that the music was not only performed by the most interesting and talented artists but also produced by the best African producers. Authenticity and heart were important to me.”

See the tracklist below:

The Lion King: The Gift: