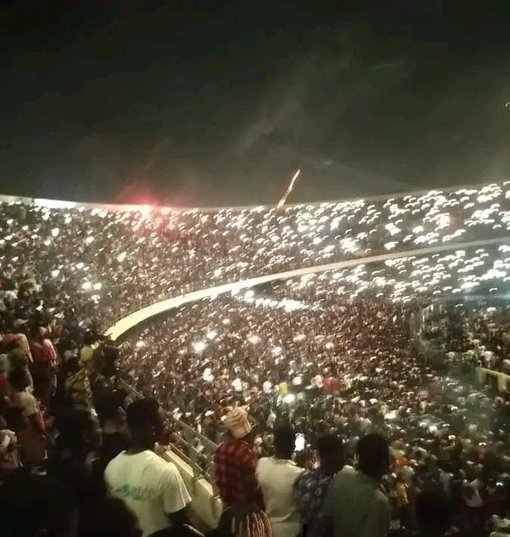 Thousands of fans trooped to the stadium to patronise and support the two artistes, who command large followings in the country.

In videos that have gone viral on social media, fans could be seen occupying every section of the stadium even before the show started.

Before the concert, Shatta Wale had expressed hope of filling the stadium following Wizkid’s no-show weeks ago.

"...if we want to fill the Accra Sports Stadium we can fill it but when we fill it they should say we have filled it because it is not easy...this December the fans can come and fill the other side. We want to invite everybody to come to celebrate Christmas with us,” the dancehall artiste said, as quoted by Ghanaweb.

And the fans of Shatta Wale and Medikal didn't disappoint as they came in their numbers to fill the stadium.

The show which started on Saturday Decemeber 25 around 8 pm ended the following morning at 7 pm.

I woke up to an absolute incredible milestone by @shattawalegh & Medikal yesternight into the early hours of this morning.

Herhhh😳😳😳😳 Shatta Wale and Medikal did this for Ghana!
pic.twitter.com/097BCM8V2k

Spread Positivity
Freedom Wave Concert 2022 was a success. Checkout the 360 view in the video
I was live in the ground until 6:34 AM#freedomwaveconcert2 pic.twitter.com/I3WRyBcxkk