Grab early bird tickets for Uncle Ebo's “NOT MY HUSBAND!” this October 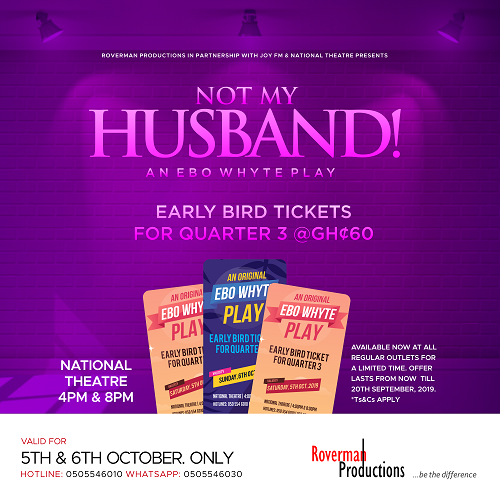 Early bird tickets are available for the third quarter theatre play from Uncle Ebo Whyte and his Roverman team.

After putting up a massive sold-out show last quarter titled “I WANT YOUR WIFE”, Uncle Ebo Whyte and
his Roverman team are working on another play; “NOT MY HUSBAND!”.

The team is aiming to make this a very special quarter, as it is their anniversary quarter.

Although currently tight-lipped about the plot, Roverman promises that NOT MY HUSBAND! will be a worthy successor to the previous plays from Roverman.

Roverman is also running an early bird promo, which gives patrons the chance to buy tickets at 60 cedis
instead of 80 cedis. This offer ends on 20th September.

Uncle Ebo's 'I want your wife'; How fake prophecies can destroy marriages

Playwright Uncle Ebo in his recent play 'I want your wife' focuses on the effects of fake prophecies in churches and how it can destroy marriages.

The play which came off at the National Theatre on July 13 and 14 did not only treat the audience with good episodes but came with a lesson on fake prophecies and how some wealthy people in our community take advantage of the church for their personal interest.

Ben and Abena have married for ten years and it has been heaven on earth for them. Their marriage is the envy of their mates because of the bond they share.

Then the unfortunate happened, a message from a Prophetess came that Abena should leave Ben for Mr. Yeaboah a rich businessman who by virtue of his wealth holds the position of a deacon in their church.

With an opening episode that ushered the audience into an exciting beginning of 'I want your wife', the church scene revealed the kind of awful behaviors that Christians exhibit in the house of God with some hating each other and others gossiping.

The church led by the head pastor forces Ben to leave his wife in obedience to the prophecy by Sister Deborah, the church’s prayer warrior and prophetess, whose prophecies are not toyed with as they come true all the time.

Confused and unhappy with the “instruction” from God to leave his wife for his rich rival, Ben fights with everything within his means to stay with his wife but interestingly, she supports the prophecy.

But Auntie Nana an elderly in the church questions the prophecy but faced opposition from some members who provided reasons for them to obey.

Most people at the auditorium could not hold themselves but laugh out loud, Abena disagrees with the prophecy but Ben could not utter a word and he remained silent.

Abena after the prophecy begins to behave awkward towards Ben, he questions everything he does.

But their marriage is saved by a counter-prophecy which required Yeboah to give his house and car to Ben which he refused exposing the earlier prophecy.

I Want Your Wife is not just a hilarious play that sent patrons into fits of laughter but it highlights how the rich are exploiting the church to push their selfish interests and disappointingly, earn the support of church leaders because of their status.

It also teaches Christians to be discerning about prophecies that come to them and not just fall prey to anything attached to Christian doctrines, beliefs, and practices.