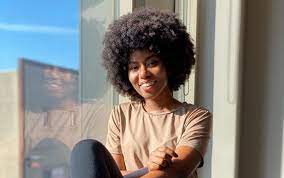 Afrobeat songstress MzVee has appeared to be the first Ghanaian artiste featured on Grammys Press play at home platform.

The ‘Daavi’ hitmaker made a statement with her fashion sense as she appeared on the platform.

MzVee wore an off-shoulder leather dress with hoop earrings and afro hairstyle, her entire backdrop was lit with globe lights that sparked the stage as she sang.

One of five tracks MzVee released in 2021, “Coming Home” features another African star, Nigerian singer Tiwa Savage. Though MzVee sang the song solo for Press Play At Home, she and Savage teamed up for its official music video that premiered in October.