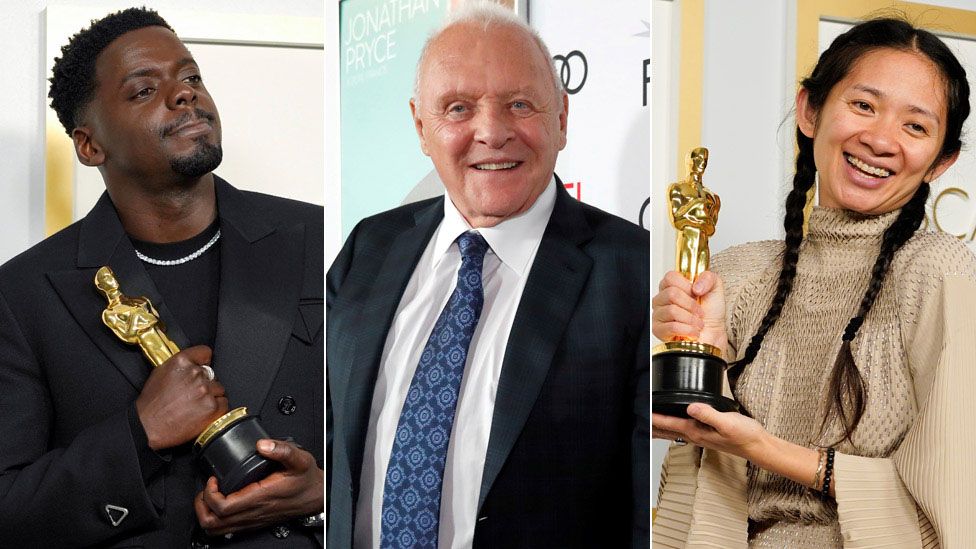 Nomadland's Chloe Zhao made history as the first woman of colour and second woman to win best female director.

Sir Anthony has become the oldest acting winner, earning his second Oscar at the age of 83, while Kaluuya is the first black British actor to win.

She won best original screenplay for Promising Young Woman, which she also directed. 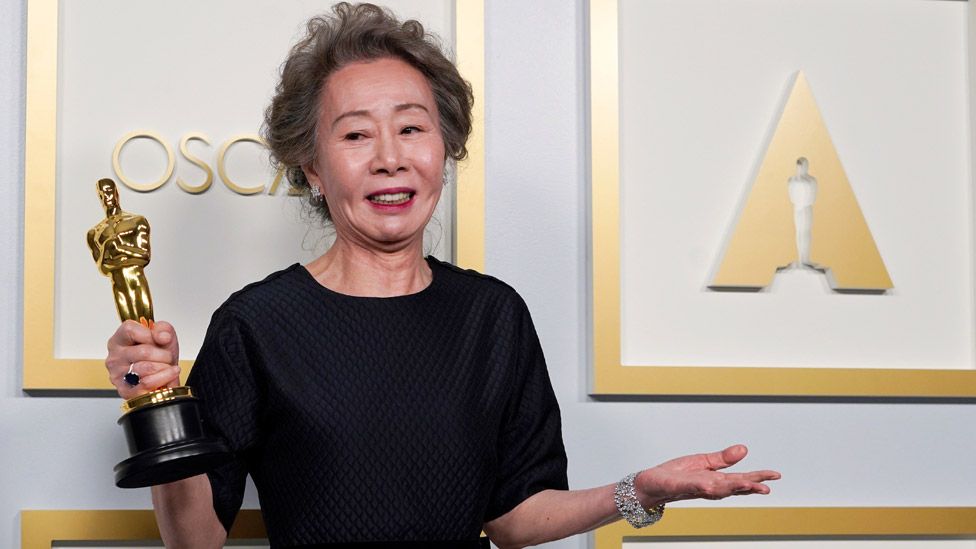 The trophies were handed out in one of the grand halls at Los Angeles's stylish Union Station to allow for a Covid-safe ceremony, while many UK-based nominees were at a venue in London - although Sir Anthony was at neither.

Sir Anthony won best actor for his masterful performance as a man suffering with dementia in The Father, 29 years after he won his first Oscar for The Silence of the Lambs.

His victory was the biggest surprise of the night. The award had been tipped to go to the late Chadwick Boseman, who died at the age of 43 last August, for Ma Rainey's Black Bottom.

It was perhaps a surprise to Sir Anthony himself, who was neither in LA nor at the British Film Institute in London, the ceremony's UK venue.

The actor was thought to be in his native Wales, and there was not an option to appear via Zoom, meaning he did not appear on screen or in person.

The slow-burning drama about a woman living in her van in the American West after the financial crash won the top prize for best film, while Zhao made history as the first woman of colour to be named best director.

The only other woman to have won the directing prize was Kathryn Bigelow for The Hurt Locker in 2010.

McDormand, who now has three Oscars, is one of the only professional actors in the film. Most of the rest of the cast is made up of real people playing fictionalised versions of themselves.

In her acceptance speech, Zhao thanked the real-life nomads "for teaching us the power of resilience and hope".

McDormand spoke of her hopes for the revival of big-screen cinema, asking viewers: "One day very, very soon, take everyone you know into a theatre, shoulder to shoulder in that dark space and watch every film that's represented here tonight."

She then said: "We give this one to our Wolf," and howled like a wolf - a tribute to the film's sound mixer Michael Wolf Snyder, who took his own life at the age of 35 last month.

Meanwhile, Mank, which led the nominations with 10, picked up two awards, as did Sound of Metal, Judas and the Black Messiah, Ma Rainey's Black Bottom and Soul.

Victorious Kaluuya 'happy to be alive' 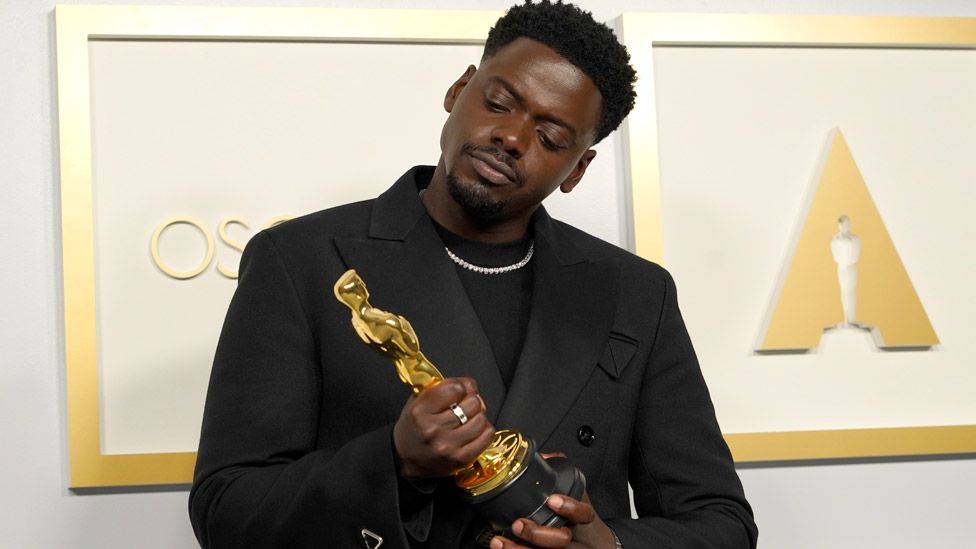 The 32-year-old Londoner won best supporting actor for his incendiary performance as Black Panthers leader Fred Hampton in Judas and the Black Messiah.

"What a man. How blessed we are that we live in a lifetime where he existed," the actor said. "I am humbled to be nominated for portraying a man whose principles I deeply respect and for guiding me to walk in his footsteps."

Kaluuya also paid tribute to his mother, who was watching at the BFI, who he said "gave me my factory settings so I can stand at my fullest height".

But she could be seen asking "What is he talking about?" when her excited son told the global audience of millions: "My mum met my dad, they had sex, it's amazing. I'm here. I'm so happy to be alive so I'm going to celebrate that tonight."

Yuh-Jung Youn became the first South Korean actress to win an Oscar, for her role as the grandmother in Korean-American family drama Minari.

She beat Olivia Colman, Amanda Seyfried, Maria Bakalova and Glenn Close to the prize for best supporting actress. It was Close's eighth nomination without a win. Youn said she "doesn't believe in competition" and paid tribute to her fellow nominee, asking: "How can I win over Glenn Close?"

From Call the Midwife to the Oscars

The night's other British winners included Emerald Fennell, for Promising Young Woman, her first film as writer and director.

Until now, Fennell has been best-known for appearing in front of the camera, playing Patsy in BBC drama Call the Midwife and Camilla Parker-Bowles in Netflix's The Crown.

Her satirical thriller stars Carey Mulligan as a woman avenging the rape of her best friend. In her speech, Fennell recalled how they shot it in 23 days while she was heavily pregnant.

She thanked her family, including her young son, "who did not arrive until a couple of weeks after shooting, thank God, because I was crossing my legs the whole way through".

She is the first British woman to win the best original screenplay award since it was established in its current form in 1958.

The ceremony was delayed by two months and was inevitably different this year. At Union Station, nominees walked an unusually sparse red carpet before sitting, spaced out but mostly maskless, in one of the station's converted halls.

Like last year, there was no single host, so the show was introduced by director and Oscar-winning actress Regina King, who began on a political note.

Referring to the conviction of former police officer Derek Chauvin of the murder of George Floyd, she said: "If things had gone any different in Minneapolis I might have traded in my heels for marching boots," she said.

Most nominees and winners were there in person, but some were in London, while others appeared by satellite from locations including Paris, Prague and Sydney.