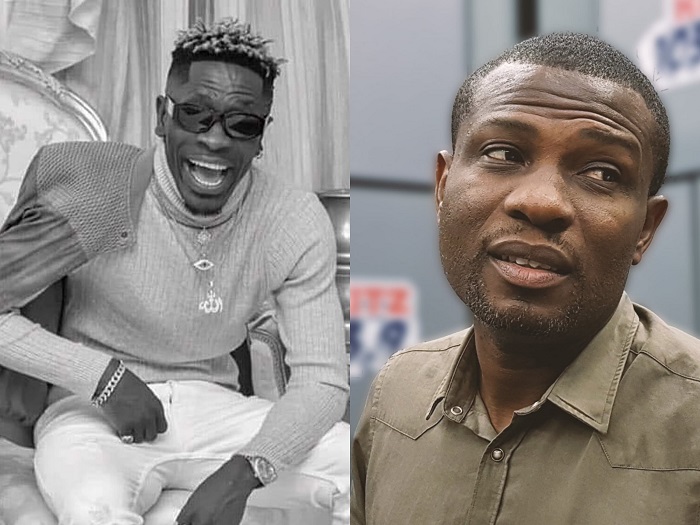 Programs Director for Accra based radio station Hitz FM and a member of the Vodafone Ghana Music Awards board, Mark Okraku Mantey has blamed Shatta Wale's mother for her son's continues misbehaviour in public.

According to Mark Okraku-Mantey, it is Mama Elsie's fault that Shatta Wale behaves the way he does because she has supported him through all his dirty games.

Mark Okraku-Mantey disclosed that Shatta insulted him some time ago and when he reported Shatta Wale to his Mama Elsie, she told him to keep quiet and listen because Shatta Wale is a straightforward person.

"Shatta Wale insulted me because of a business I wasn't in charge, he insulted me from head to toe in front of his mother and when I confronted his mother, the mother told me to keep quiet and listen because his son is straightforward."

"I don't believe Shatta's mother, always giving the impression that she is good and the son is bad," Mark Okraku-Mantey added.

In response to Mark Okraku Mantey’s allegations, mother of the ‘Ayoo’ hitmaker, Mama Elsie also known as Shatta Mama in an interview with Razzonline cautioned Mark to stop misquoting and misrepresenting her.

“This is not the first time Mark is saying this…Mark hates me so much, so am not surprised ..but let me remind Mark that, I have never insulted him before, if you are owing somebody, and I tell you that my son wouldn’t lie for saying you are owing him, does it mean am supporting his dirty games?

“How can a mother support everything her child does?… We’ve only met once and that was when I went to his house with my son to collect money he was owing to my son which he paid …So, in this case, did I act correctly or not? Where did I go wrong? Even on that day, Mark rather insulted me…and it happened during the Bandana from Ghana days…I like Mark’s submissions on radio and on TV, I like him as a person but he should stop peddling those dubious allegations against me”.

Shatta Mama, in a sorrowful mood, pleaded with the general public to forgive Shatta Wale and Stonebwoy over their brawl.

”I’m in one of my trying times…My son and Stonebwoy are in court, give me the peace of mind to sympathize with them…more so, I will entreat Mark to go to Hot FM and Peace FM so that they give him some of the interviews I granted them and check whether I support everything Shatta does”.