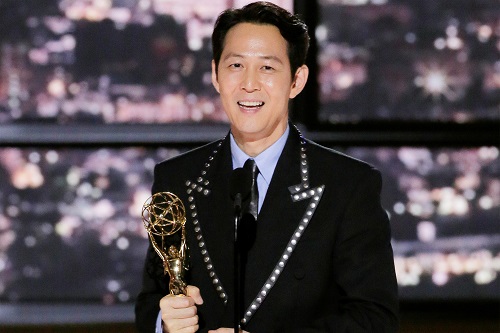 Squid Game's Lee Jung-jae has become the first Asian star to win the Emmy award for best male actor in a drama.

The South Korean won for playing the main role of the increasingly desperate Seong Gi-hun in the hit Netflix show.

The show's creator, Hwang Dong-hyuk, won the best drama series director prize, also the first Asian to do so.

Ted Lasso won best comedy series for the second year in a row, while outstanding drama went to Succession, also for a second year running.

The drama's British creator Jesse Armstrong made a jibe about the monarchy during his acceptance speech at the US TV industry's most prestigious ceremony of the year.

"It's a big week for successions - new King in the UK, this for us," he joked. "Evidently a bit more voting involved in our winning than Prince Charles."

Armstrong then added: "I'm not saying that we're any more legitimate in our position than he is. We'll leave that to other people."

Another Succession cast member, Matthew Macfadyen, won best supporting drama actor for his portrayal of ambitious interloper Tom Wambsgans, which he said was a "bonkers gift of a role".

However, Cox could not replicate last year's best actor win, losing out to Squid Game's Lee.

His win was mirrored by his co-star Goldstein, who won best supporting actor in a comedy series for playing Lasso's assistant coach Roy Kent for the second year running.

Hotel satire White Lotus was the biggest winner overall, picking up 10 prizes including best limited series, beating competition including Inventing Anna and Pam & Tommy, a drama based on the relationship between Pamela Anderson and Tommy Lee.

Seyfried was named best lead actress in a limited series or anthology for her role as Elizabeth Holmes in The Dropout, based on the real-life story of the disgraced biotech entrepreneur.

Garner didn't go home empty-handed, however, scooping best supporting actress for her role as Ruth in Netflix crime drama Ozark - the third time she has won the award for that role.

Keaton won his first Emmy for his role as a small-town doctor in opioid crisis drama Dopesick, replicating his Golden Globe win earlier this year.

Keaton, who took time out of the industry for a few years, referred to his "doubters" and "believers" during his speech.

Popular newcomer Abbott Elementary, a mockumentary set in a US primary school, also had a share of the success when Sheryl Lee Ralph won best supporting actress in a comedy. She plays no-nonsense teacher Barbara Howard and is the first black actress to win in this category since 1987.

She sang the opening lines of Dianne Reeves' song Endangered Species after accepting her award, adding in an impassioned speech afterwards: "This is what believing looks like."

Her co-star and the show's creator Quinta Brunson won the award for comedy series writing.

Singer Lizzo won her first Emmy for best reality competition for Watch Out For The Big Grrrls, a category recently dominated by RuPaul's Drag Race.

The show offers plus-size dancers the chance to compete to join the About Damn Time singer on tour.

Lizzo was tearful as she collected her award, saying: "When I was a little girl, all I wanted to see was me in the media. Someone fat like me, black like me, beautiful like me."

There was a muted build-up to the event, with some pre-show festivities called off following the death of Queen Elizabeth II last week.

The British Film and Television Academy cancelled its traditional Hollywood tea party for nominees, while the Canadian consulate postponed its celebrations.

But beyond the Succession speech, it was not mentioned during the ceremony, which was hosted by Saturday Night Live comedian Kenan Thompson and was the first full-scale Emmys since the pandemic.

The Emmys are voted for by more than 25,000 members of the US Television Academy, which represents those in front of and behind the cameras.

This year's awards honour the best TV shows that premiered or streamed between 1 June 2021 and 31 May 2022.