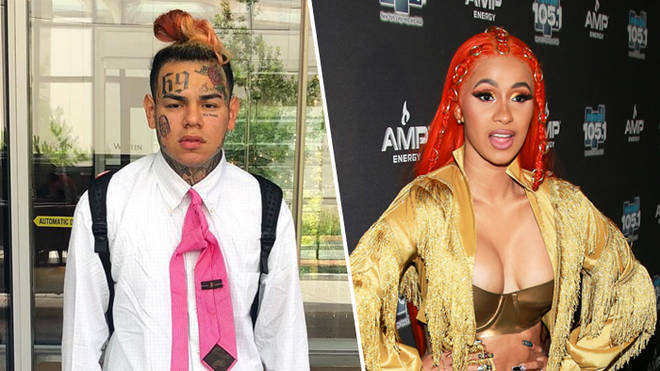 Rapper-turned-snitch Tekashi 6ix9ine threw rhymesters Cardi B and Jim Jones under the bus as members of the Bloods as he testified about how he used his former crew for fame, on Thursday.

The 23-year-old rapper, whose real name is Daniel Hernandez, ticked off the names of Nine Trey Gangsta Bloods members as he took the stand in Manhattan federal court against reputed associates Anthony “Harv” Ellison and Aljermiah “Nuke” Mack.

Under cross-examination, Tekashi confirmed that Cardi B was a Bloods member, though he denied he copied her blueprint for fame by including members in his music videos.

“I knew who she was. I didn’t pay attention,” he told the court.

During his testimony, the rapper has detailed his life of crime with the crew, all while name-checking members such as rapper Jim Jones.

The “Gummo” singer faces a mandatory prison sentence of 47 years, though he could walk free on time served for cooperating in the racketeering trial.

On Thursday, Tekashi was questioned on whether he was singing in the case to help the government or to get a more lenient sentence.

“Little bit of both,” he testified.

Cabinet has approved the establishment of the Accident Investigation and…

ICUMS is a much better system than GCNET – Prof. Adei

Board Chairman of the Ghana Revenue Authority (GRA), Professor Stephen Adei has…