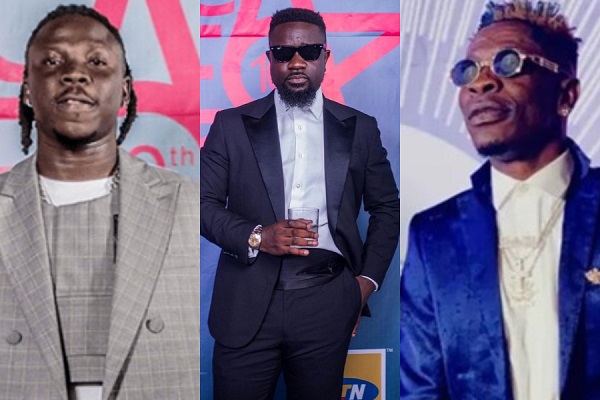 Among the songs were Omo Ada from Medikal, Nothing I get by Fameye, Nobody by Kwesi Arthur, Daavi Ne Ba by Kawoula.

Prime News has sampled lists of eleven songs that made waves in 2019.

READ ALSO: Video: CJ Biggerman gets his wish as he performs with Rick Ross

Medikal cemented his popularity and position in the music industry with ‘Omo Ada’, a song produced by UnkleBeatz and released in January. The song was played on radio, TV, restaurants, weddings with fans doing the ‘dem sleep’ dance. The remix which featured his girlfriend Fela Makafui and Shatta Wale was a big deal as it topped charts for months.

There is a reason this song was released in April but not fixed somewhere in the middle of this script where it belongs. We are breaking the rules! We won't follow the norm! See erh, this song, although does not possess the quality the aforementioned and others have, it broke boundaries, tore territories and became an anthem in all parts of the world, thanks to Patapaa's scopatuma lines. Remember the 'scopatuma challenge' and the fact that Atletico Madrid jumped unto the trend? Yo, alatosweeeee!

In March, an anthem was born and it came from a new artiste, Fameye. With a unique voice texture, Fameye caught the attention of many. Another masterpiece with production credit to B2, the tune indirectly advised people not to be envious of others as those they envy may not have achieved anything significant in life. He’s got nothing but people envy him – Nothing I get!

Another artiste from the camp of Ground Up Chale Kofi Mole also had a hit song. Titled ‘Don’t Be Late’, Mole says he composed the song as a result of how painful it was when his girlfriend left him. ‘Don’t Be Late’ was produced by Kobby Jay and released in April.

Arguably one of the biggest collaborations in 2019! Stonebwoy featured Jamaican singer Beenie Man of a banger titled ‘Shuga’ with production credit going out to Street Beatz. It was released in April.

RuffTown Records signee Wendy Shay in May released 'Steve Wonder' which featured Shatta Wale. Punctuated with innuendos, the song was about how Wendy Shay had become a hot commodity in the music scene to the extent that it irks haters. If you hate her because of the feet she has achieved, die! - she said in the song. It was produced by MOG.

Melissa, a joint production by Paq and Da Maker, was released in July. The highlife song was pleasing to the ear as people readied to sing along and dance to it as soon as they hear the catchy intro. The song came with its colourful video.

After the collaboration with Beenie Man, Stonebwoy featured another international artiste, this time, a Nigerian. Teni was featured on ‘Ololo’, a song produced by Ipaapi and released in September.

Touted as one of the best songwriters the country can boast of, Kofi Kinaata added to his catalogues a masterpiece in October. Produced by Two Bars, ‘Things Fall Apart’ pricked the conscience of the masses as Kinaata threw light on the ‘dirty’ lives of people. In fact, all the part time Christians who aimed to fight full-time devils loved the tune.

He was overwhelmed by how people sing his songs from the beginning to the end. Yes, obiaato ne nnwom, whether you like his fashion sense or not! And to express how he felt, Kuami Eugene released ‘Obiaato’ in October. It was produced by Jaysynths.

‘Oofeetso’ was released in November after Sarkodie successfully organized Tema Music Festival. It stoked controversy with many suggesting the song was directed at Shatta Wale who had been subtly jabbing Sarkodie.
‘Dem say you no go fit do wey you do dem shock’, sang Prince Bright who was featured on the song. The song was produced by MOG.