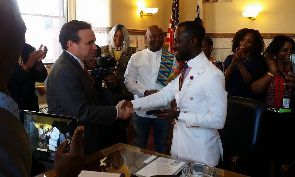 The city of Cincinnati in the American state of Ohio has declared November 17 as 'Okyeame Kwame Day' in honour of the Ghanaian musician who is an International Cultural Ambassador to the city.

Conferring the honour at a ceremony on Monday, November 21,  at the Renew Community Church, the Mayor of Cincinnati praised the artiste for his unprecedented efforts at fighting Hepatitis B, for which the Black Nurses Association recognises declaring, “Now, therefore, I John Cranley, Mayor of the great city of Cincinnati do hereby proclaim November 17th 2016 as your day!”

“And we want to make sure you always come back to Cincinnati and we have an open door for you. So we’re  also giving you a key to the city”, he added.

The presentation of the key to the city signifies the beginning of a new day where the African is given recognition for their positive contributions to development. It represents a freedom of expression for the thousands of the residing  Ghanaians. It is a symbol of trade, and cultural unity between Ghana (through the Ashanti empire) and Cincinnati of Ohio State.

The 17th of November of the ensuing years is expected to see a collaboration between the artiste and various departments on culture and health agencies to inspire people through his music.

Born on April 17, 1976 as Kwame Nsiah Apau, Okyeame Kwame has been one of the most revered rappers in Ghana since he came into the limelight as part of the Akyeame duo in 1997.

He founded the Okyeame Kwame Foundation in 2009 to raise public awareness on Hhepatitis B and to provide screening, prevention and education to mitigate the disease in Ghana and with support from MTN Ghana and the MDS-Lancet Laboratories he has been successful in the venture.