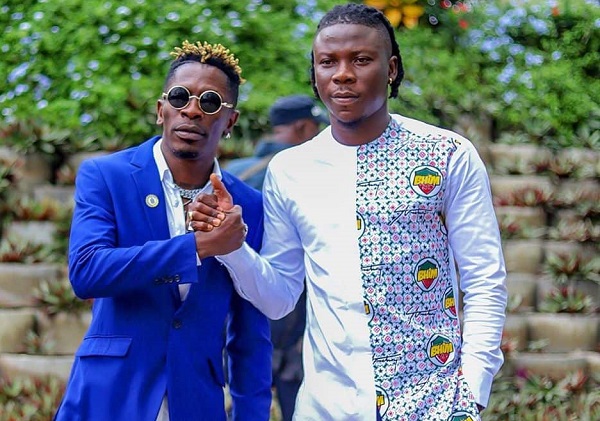 Dancehall artiste Shatta Wale has thrown a shade at Sarkodie again after suggesting that he wishes Stonebwoy was on Beyonce's album rather than the rapper.

Shatta Wale was the only Ghanaian artiste featured on the Lion King album with a host of Nigerian acts in there.

Shatta in an interview on Vibes in 5 with Arnold says he would have wished Stonebwoy was featured on the album and that he does not rate Sarkodie.

"I would have wished my brother Stonebwoy was featured on the album, he now understands me and I work hand in hand with him".

Shatta was asked about how fellow Ghanaian musicians shared their delight at this massive development on Twitter and he said he was happy with Samini's tweet but not that of Sarkodie.

"I don't rate Sarkodie, I didn't even need to retweet his tweet because he just brags and always feels he is right. I was there before he came out but he feels he can advise me, he doesn't respect," he added.

In addition, there’s a song with JAY and Bey’s daughter Blue Ivy Carter. Check out the cover art at Beyoncé’s website.
The Lion King: The Gift, executive produced by Beyoncé, is out this Friday, July 19 via Parkwood Entertainment/Columbia Records.

The soundtrack to The Lion King arrived last week. As with The Gift, it includes Beyoncé’s new song “Spirit.” The CGI live-action remake of The Lion King hits theatres July 18.

Beyoncé said in a statement the collaborations with African musicians were important because the film is set in Africa and “authenticity and heart were important to [her].”

“This is a new experience of storytelling. I wanted to do more than find a collection of songs that were inspired by the film. It is a mixture of genres and collaboration that isn’t one sound. It is influenced by everything from R&B, pop, hip hop and Afro Beat.”

“I wanted to put everyone on their own journey to link the storyline,” she continued. “Each song was written to reflect the film’s storytelling that gives the listener a chance to imagine their own imagery, while listening to a new contemporary interpretation. It was important that the music was not only performed by the most interesting and talented artists but also produced by the best African producers. Authenticity and heart were important to me.”

See the tracklist below:

The Lion King: The Gift: