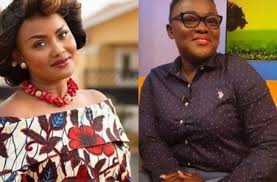 Nana Yaa Brefo resigned from her position as the host of Badwam on Adom TV on May 13, 2020.

Announcing her exit on social media, she posted “I want to say a very big THANK YOU to MultiMedia and my colleagues. Also want to my fans for the support, really appreciate also thank those who did not like me, you made me grow during my 10 years stay at Multimedia, (Adom TV ). I BOW OUT of Multimedia to follow other dreams. Thank You all for been there. Akpe”.

Even though reasons for her resignation is unknown there are speculations that she resigned due to her recent interview with McBrown which she received a lot of backlash due to her line of questioning.