'Celebrating my mother' by Elizabeth Ohene 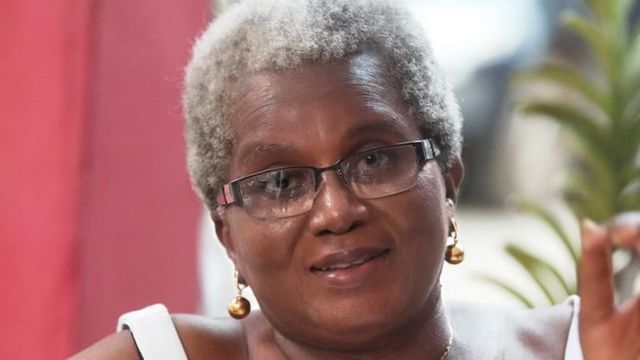 If my mother were alive, she would have turned 100 on October 16, 2021. Mrs. Augustine Akosua Atafe Ohene, nee Asempapa, was born on October 16, 1921 in a little village near Mangoase in the then Gold Coast colony.

I am writing about my mother to celebrate the centenary of her birth. Her story would find resonance with many, many other Ghanaian mothers who simply do what they have to do without any fuss and manage to influence generations and make our folk a nation, if I might borrow the language of the hymn that I can’t get rid of in my head.

My mother was the female half of a set of twins born to Emile and Susanah Asempapa.

The story of my mother’s parents, my maternal grandparents deserve to be told but it will be for another day.

My mother’s father, Emile Kwamikuma Asempapa was what was known grandly in those days as a German Scholar, having attended German-run schools in the then German colony of Togoland, part of our present-day Volta Region.

He was engaged in the business of cocoa buying and had moved to Mangoase in present day Eastern Region with his wife Susanah.

He died early when my mother was in Primary 5, but she made it to Middle School at the Girls Boarding School at Peki Blengo, where she left academic records and was reputed, especially to be “very good with figures”.

Even though she got a distinction in the Middle School leaving exams and won what was called the Director of Education Scholarship to go to Achimota School, a full-scale crisis erupted in the family because her uncles could not or would not agree for any more money to be spent on a girl for higher education.

They felt and said enough money had already been spent on her and she already had enough education.

She was the first female to have reached that level of education in the Abutia area.

She then had a three-month training and started work as a Pupil Teacher but that didn’t last long when she got married to a certain Stephen Kwasi Ohene and she became a full-time home maker.

That is where my siblings and I came in, they, my parents, had eight children and six of us made it into adulthood.

The childhood home that our parents provided us was a happy place and full of laughter.

Each of us discovered to our surprise much later in our lives that other homes were not as happy or as well organised.

Our parents went everywhere together and always had something to tell each other; if they had rows, we never saw or heard one.

I have recounted the obsession our father had about balanced diets and eating wholesome foods.

The chicken on Sundays and the monthly slaughtering of a goat, the grasscutter and mushrooms that he liked so much.

When the amount of bread being eaten by my teenage brothers reached spectacular heights, she started baking bread for the house instead of buying.

The many different meals made from ripe plantain and the indulgence of preferences.

Well, Mr Ohene gave the orders, he never entered the kitchen and it was his wife who made sure meal times were such happy occasions in the Ohene household.

Our mother was at the centre of our lives and everything ran like clockwork in her house.

She taught us to read long before other children our age could read and she was helping with homework way into our secondary school years.

Her formal schooling might have ended at Middle School Form Four or Standard Seven as it was called during her time, but she certainly spoke and wrote better English and Ewe than many today who claim to have university degrees, but that, again, is another story.

She never got over not being allowed to go to Achimota School for lack of funds and it became a lifelong passion to ensure that every girl she knows is able to go to school and doesn’t drop out for lack of money.

She trained as a marriage counsellor and family planning advisor.

In later life when her children were grown up and working, we came under unending pressure to help with her ever increasing collection of young people who must continue school and not drop out because they have had babies.

She collected bedsheets and towels for young people starting out in life.

We were made to understand very early that her children included far, far more than the biological ones and a succession of nieces and nephews lived with her and were subjected to the same regimen as the Ohene children.

You did not stay in bed beyond 5.30 in the morning. You did not consider scrubbing bathrooms and making beds as chores.

I can state categorically that no one who was brought up by my mother would ever litter.

That I am not a great cook and do not really like cooking at all must be one of life’s wonders, but then my two sisters, Grace and Susie make up for it by taking after her cooking skills.

She maintained strict discipline, did not use a cane but her special look of disapproval was far, far worse than being whipped.

She was a great believer in everything being done in moderation but you would take her for granted at your own peril.

She held strong views and expressed them in her firm and quiet manner.

Her husband, our father, S.K. Ohene was the registered politician, but she it was, who mounted a platform in the year 2000, to try and convince a crowd at Abutia to vote for the New Patriotic Party (NPP). You needed to be very brave to do that.

Our mother reached the age of 90, ten years ago, on October 16, 2011 and at the small party we had for her, she still had the strong beautiful singing voice that had always rang out and filled the house in the mornings.

The conversation at the party was about how to improve the quality of teaching in the school at Abutia.

Three months later, on January 27, 2012, Mrs Augustine Atafe Ohene died in the manner she had always wanted, quietly and without a fuss. We are celebrating what would have been her 100th birthday, the centenary anniversary of her birth.

One of her nieces said at her funeral: the peacemaker, counsellor, teacher and source of refuge is gone. She prayed for and with us. She set very high standards and we used to think she was too strict; you can't be late to school or to church. Nobody entered her house and left without having something to eat. If you wanted to drink tea, you paid her a morning visit but you should be ready to answer questions about progress at school.

Her epitaph must be: “Here lies Daa, a woman who loved God and her fellow men, and shared whatever she had with anyone who comes her way”