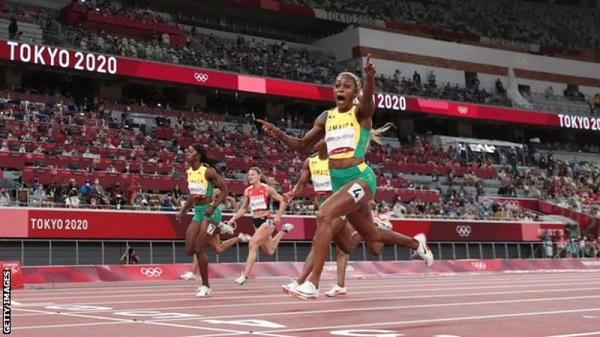 The latest bout of pain was intense. And the doubts bubbled up fast. She feared, as the tendon stayed tender, that she might miss the trials, ending her title defence before it had begun.

As she rested and iced up her heel, she knew she had to fix something else as well.

"My mind was not in the right place," she told BBC's All About podcast. "I had to change that talk in my head."

Every morning, Thompson-Herah would wake, pray and read the bible. She started listening to a particular spiritual - Anywhere You Lead Me I Will Go by Nigerian gospel singer Mercy Chinwo - on repeat.

Her faith in God bolstered her faith in herself. But if the meek inherit the earth, a little more swagger helps an Olympic title defence.

After every practice session, she would reach for her phone, open up the notes app and write down and read out a series of affirmations.

"I will be the fastest woman alive. Say it, believe it, work for it and pray for it. I will be the double Olympic champion. Today is my day. I am the greatest," it ended.

"You write it down, you talk it, you say it, and naturally you will believe," Thompson-Herah, 29, explained.

Plenty of others needed convincing as well, though. Thompson-Herah had finished off the 100m podium at the London 2017 and Doha 2019 World Championships. She hadn't made the 200m final at either.

In those Jamaican trials, she made the team for Tokyo, but only just. Thompson-Herah was third in the 100m. Shelly-Ann Fraser-Pryce, the fastest woman alive and the world champion, was well out in front. Shericka Jackson, usually a 400m specialist, also finished ahead of Thompson-Herah.

But a month later, the scene had shifted.

As she grew stronger, rivals such as Dina Asher-Smith,Sha'Carri Richardson and Blessing Okagbare fell out of contention.

The affirmations were coming to pass. A place among track's immortals awaited. If she could negotiate the final hurdle.

"I was super nervous, more than normal," Thompson-Herah said as she remembered the night of the 100m final. "I felt like I was going to explode. I could not wait to get into my blocks and just run.

"But first they turned off all the lights in the stadium and started to introduce all the finalists. They introduced lane two and then lane three, but then, instead of me in lane four, they skipped me and went to lane nine.

"I didn't know why. In the end, they left me for last. Then there was two seconds of silence and we were called to our marks.

"I told myself I cannot change anything or fix anything. One last breath and that was it."

Nothing needed fixing. She burst through the line at the other end of the straight and sucked in the air, still Olympic champion and now the second-fastest woman of all time.

Only American legend Florence Griffith-Joyner had ever gone quicker than Thompson-Herah's winning 10.61 seconds.

And it could have been faster. It could have been even closer to the 10.49 world record. In the final 10 metres, instead of pushing for the line, Thompson-Herah raised her arm in celebration.

"A million times," she laughed when asked if she had watched the race back since.

"I could have run 10.5, if I was not celebrating. I didn't realise I'd done the pointing. I think my body knew I wanted to win so badly.

"If I could run it back over, I would run straight to the line. That is the thing I could fix - the start was great, the transition was great, just that last 10 metres."

She didn't have too long to dwell on it in Tokyo. Three days later, she became the first woman to do an Olympic double-double as she also defended her 200m crown. Again, she did it with a performance second only to 'Flo-Jo' on the all-time list.

The small details, the self-belief, the training-day grind - that's how Thompson-Herah made history in 2021. But it is how she has operated her whole career.

She was a good junior athlete, but far from spectacular. She wasn't the best in Jamaica, never mind the world.

"I didn't win much when I was smaller, I wasn't going to international competitions, but I stood by the sport because the love I have for it," she added.

"The love takes me to higher places. I wasn't the champion in high school, other girls were faster than me. But I'm competitive, hard working and motivated because of where I'm coming from."

Thompson-Herah is ambitious for herself, saying she has yet to reach her peak. With World Championships in Eugene and Budapest in successive summers, she wants more medals. And those world records are tantalisingly close if her injuries ease and she has a clear run at the clock.

But she is also ambitious for her sport and event. The women's sprints are packed with talent, characters and sub-plots. The start-lists leave the men's equivalents in the shade.

"The ladies are coming out and performing and that helps me to run even faster," she said.

"Everyone wants to be on their A-game. These ladies are putting on a fire this year and I hope we can take it back again next year.

"We want to build our women's sport, because sometimes it is always the men doing their thing. It is time for us to take over."

Whether anyone can overtake Thompson-Herah is another thing entirely.