'Ghana Month: When the native tongue is a crime, Part 1' by Anny Osabutey 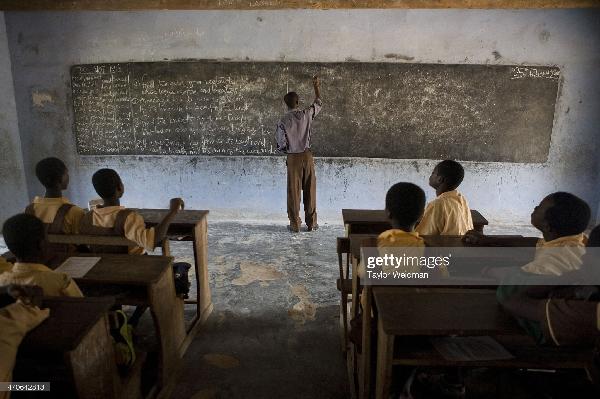 Imagine being ordered to stand before a concrete black board, hands spread apart, forehead rooted onto the board, and legs closed to each other.

You are literally like one of the thieves nailed to the cross with Christ. Your crime was that you spoke in your native tongue in class. That was all you did. You did not steal from a teacher, fought a classmate, or refused to participate in class work; you just spoke in your own language and for which you must face the consequences.

And before your classmates you are asked to read the anti “Vernacular Act” Speaking vernacular is prohibited; offenders will be severely punished.  The teacher then draws his cane, repeats the sanctions and proceeds to carry out punishment.

His thick long stick in his hand, his eyes boiling with rage, his menacing looks then strike fear into your heart. Before you can catch your breath, the first stroke sinks into your back, touching the deep end of your fragile and frighten soul. He pounds your back with more strokes.

The last one is delivered with a repeated warning, leaving serious marks on your body which takes weeks to heal. The scars refuse to disappear-they have become permanent reminder of why you should hate the language of your identity.

Anyone who schooled in any of the country’s public and somewhat private schools might have encountered this anti “Vernacular Act,” and might have either fallen short of it or knew somebody who received lashes for speaking in the native tongue.

This blatant inflicting of pain on students was very much encouraged in most schools because, the thinking was (is) that, speaking one’s own language makes the student un-intelligent. So, to be an intelligent student, one is expected to speak English, even if even if comprehension is a problem.

Those who spoke the native language were heavily discriminated against in the classroom and had very little or no encouragement from their teachers. In their eyes, such students weren’t good enough to even remain in school, let alone identify themselves as students of theirs.

READ ALSO: 'Are you on TikTok?' by Anny Osabutey

The confidence of a good number of students was shattered, as a result. I was no exception.  I had been out of the classroom for more than four years, due to personal reasons. The effective and confident way I could communicate with my mates was through the local language.  I felt comfortable speaking it.

My English at this stage was dodgy but I always tried to give myself a good shot at reading books.  I was mocked for mispronunciation of words, but I was never one to easily give in to such acts of ridicule.  The stereotype was that that the smarter kids were those who spoke English.  I did not speak that well. I spoke by misapplying the appropriate grammar. Where I struggled, I resorted to Ga or Twi. And I was unapologetic about it, though I often paid the price for it by being punished, especially if it happened in the classroom. I knew the only way up was to keep trying and that was what I did.

Ironically, most schools run courses in various native tongues but had little or no regard for them. Students who scored high marks in Ghanaian languages were often mocked by their own peers.

I did Ga/Dangbe, my own tongue which I wanted to perfect in both the writing and reading. I can count the number of us who took the lessons to heart. The rest didn’t care much about whatever score they got either in class assignments or the final term examination; it did not matter to them.

Some of my classmates absented themselves from lessons and nobody cared to sanction them. On the rare occasion they came to class on time, the motive was to disturb those who paid attention.

Unfortunately, our education system has over the years remained reticent in addressing in discouraging schools from warning their teachers to desist from abusing students who use the native tongue in their interactions. I know a student who encountered one of his teachers in a conversation outside of the school premises.

It was a weekend. He was reported to have greeted the teacher in a native tongue they both shared. The teacher was so unhappy about the situation and on Monday when he came to the class, he punished the student for daring to speak Ga with him. The said student is now a medical student in the Volta region.

This mindset of one being punished for speaking his or her own language has not stopped in most schools, though it is not as pronounced as it used to be.