Is this the end of Manny Pacquiao's 26-year career in professional boxing? by Kal Sajad 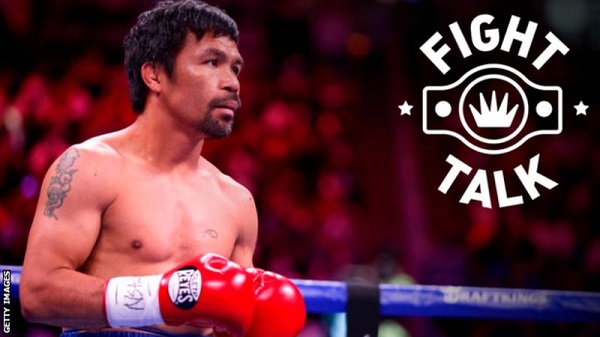 After 26 years in the sport, is it time for Manny Pacquiao to bid farewell to boxing? Will Caleb Plant be the man to overcome superstar Saul 'Canelo' Alvarez?Â

It's Fight Talk - your weekly fix of boxing news.

Is this the end for Pac Man?

I want to thank God for giving me the strength to fight. I thank my family for always standing beside me. I wish to congratulate Ugas and his team. Although, I hoped for a different outcome, I wish him the best. pic.twitter.com/jsx6vi0DY3

Put simply, Manny Pacquiao is up there with the greatest boxers of all time.

On Saturday night the Filipino suffered his eighth career defeat after losing by unanimous decision to Cuban Yordenis Ugas in the WBA super-welterweight clash.

While taking nothing away from deserved winner Ugas, it's fair to say Pacquiao was far from his best.

Now 42, has father time caught up with the boxing icon?

Pacquiao says he is "thinking about retirement" and is "60-40" in favour of quitting to focus on his political career.

If this does mark the end, what a career it has been.

After making his debut as a light flyweight on 22 January 1995, Pacquiao dominated the sport for years to come, winning an astonishing 62 of his 72 professional bouts.

An eight-division (yes, eight) champion and the only fighter to hold a world title in four separate decades, his achievements are extraordinary.

Many young fighters can only dare to dream of having a career as illustrious as his.

The blemishes on Pacquiao's record - which include losses to Floyd Mayweather Jr and Juan Manuel Marquez - demonstrate his willingness to take on the very best.

After his upset by Ugas, the boxing world paid their respect to Pacquiao, with some hinting they'd like to see him bow out and others suggesting he could fight onâ€¦

It’s sad to see our champions not look the way we are accustom to seeing them look in the ring. As a fan of the sport, it’s sad, but it comes with the territory if you stay around long enough. I hope Manny does what’s best for him and his family. Respect.

Manny Pacquiao has nothing to prove. I won’t say, “he dared to be great”, because he was already great before the opening bell of this fight.#PacquiaoUgas @premierboxing

They will never be ANOTHER Manny Pacquiao

Still a great fan of @MannyPacquiao ! He’s a legend! He still will give many guys problems too.

Whether we see Pacquiao in the ring again remains to be seen. He wants time to relax before making a decision on his future, which he has the earned the right to do so.

Having lost three of his first 19 fights, he was dropped by his promoters and forced to rebuild his career.

Coming in as a late replacement for the injured Errol Spence Jr, not many expected Ugas - who now has a record of 27 wins and four defeats - to beat Pacquiao. But his performance impressed those in the fight gameâ€¦

Timing can beat speed, and counters can work with aggressive fighters, Ugas was well prepared and executed. #PacquiaoUgas

Got to give Ugas massive credit for last night! Hasn’t shown that kind of form before! He proved how important it is to remain in shape and be ready to take unforeseen opportunities! This is something other fighters can learn from! Your not always gonna get 12 weeks! BE READY! 👊

Got to give Ugas massive credit for last night! Hasn’t shown that kind of form before! He proved how important it is to remain in shape and be ready to take unforeseen opportunities! This is something other fighters can learn from! Your not always gonna get 12 weeks! BE READY! 👊

'It's going down' - Plant in confident mood
In other news this week, pound-for-pound star Saul 'Canelo' Alvarez's next opponent has been confirmed.

All the super-middleweight titles will be on the line as the biggest draw in boxing takes on American Caleb Plant, 29, on 6 November in Las Vegas.

Alvarez - who most recently beat Briton Billy Joe Saunders in May - will go in as a heavy favourite for the undisputed clash - as the 31-year-old does in pretty much all of his fights.

But Plant - who has won all 21 of his contests - is so confident on defying the odds he is even referring to himself in the third person.

"November 6, it's going down. The first undisputed super-middleweight of all time, you're looking at him, his name is Caleb Plant," he told ESPN.

But fans can't look past another Alvarez victoryâ€¦