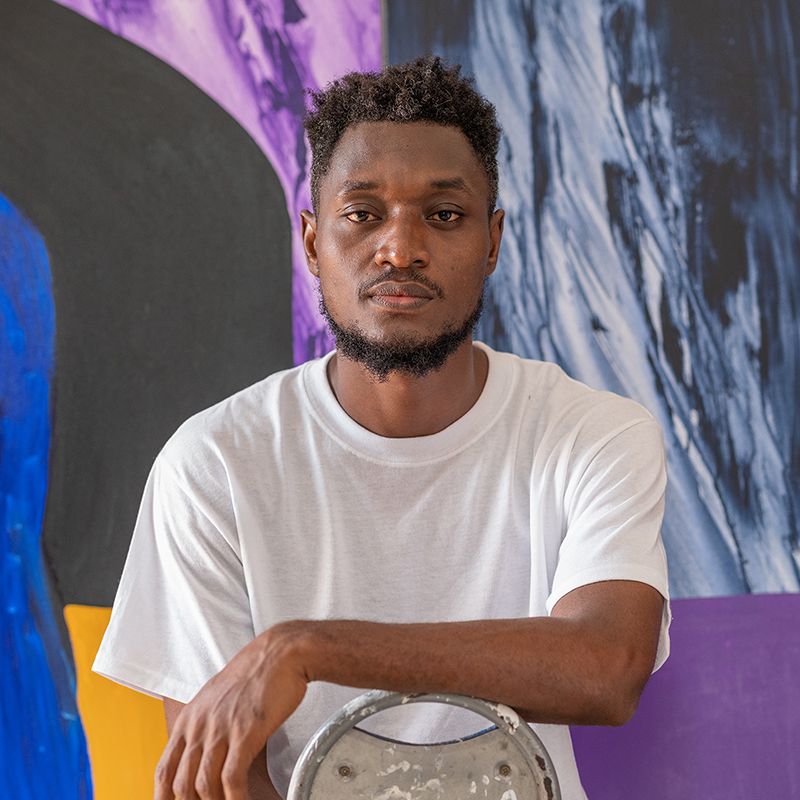 In the introduction to an almost 4minutes feature film for Efiɛ Gallery, Isshaq Ismail, a multidisciplinary artist, filmmaker, sat on a coffee table, his right leg on top of the left, and his two hands locked below the knee of the left leg.

He slowly turned towards his right shoulder, and gazed into the camera. He introduced himself and laid out his credentials. With the camera angle now facing him, he lazily shifted his eyes to avoid direct contact with the lens. The Independence Arch appeared and soon faded into an area view of one of Accra’s densely populated markets. Then, a man on motorbiked also appeared. 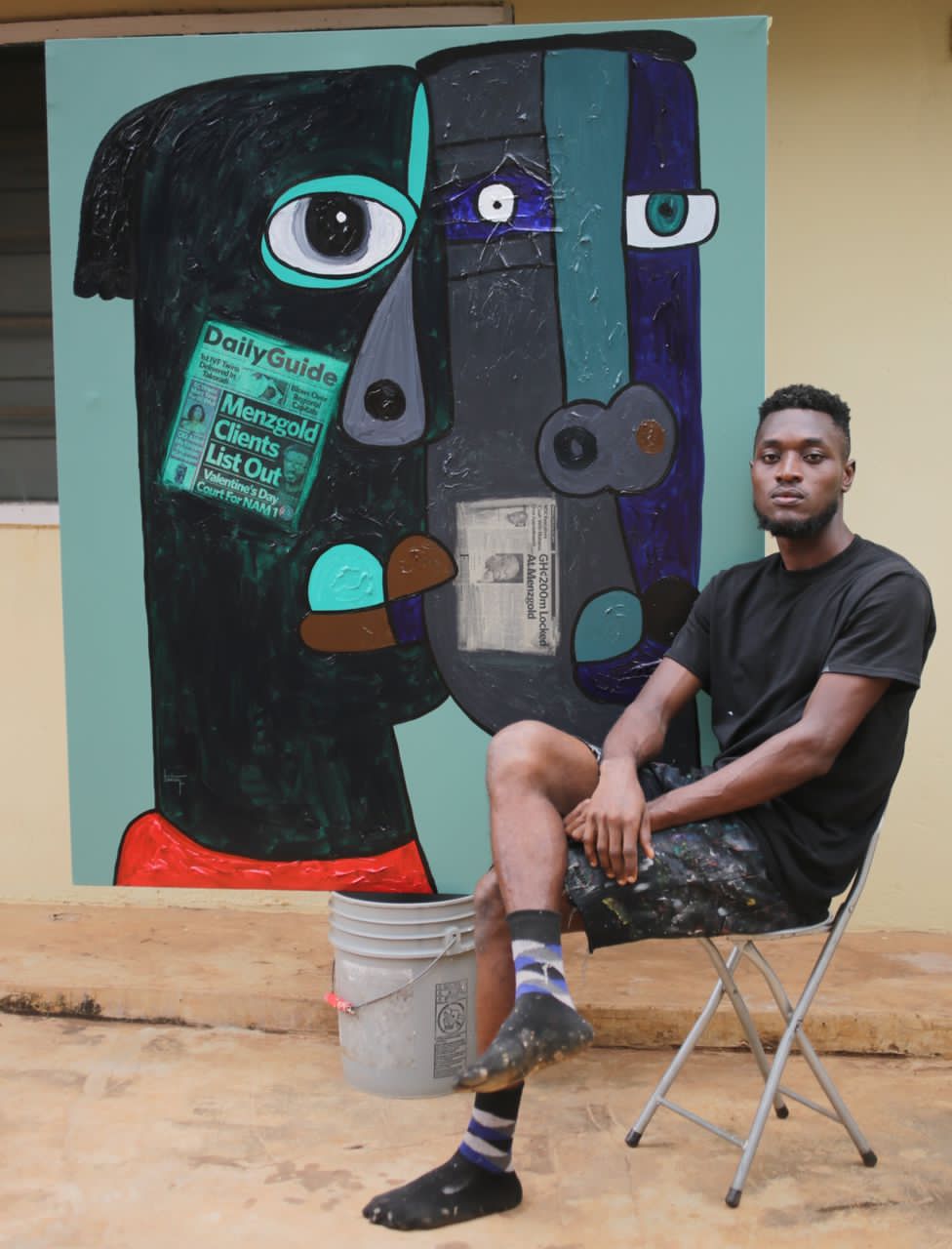 Then there was an assistant bus conductor on a “Trotro” or commercial passenger bus, hanging onto the door of the white moving bus, wafting his eyes through a crowd to see if he could lure a passenger heading his direction. The camera again turned to Isshaq who now contextualized the various scenes in relation to his work.

“My works are imbued by the conversations on place and identity. I am very much interested in the socio cultural and political realities embedded within 21st century and how those realities ultimately impact one’s identity.”

Isshaq’s works, currently on exhibition at the 1957 contemporary art gallery, here in Accra, often mirror the everyday happenings in the society. With his brush and acrylic paint, the canvas clipped to a wooden rectangular frame, spread in a silent studio, he translates stored ideas in the brain onto the canvas, and with different sizes of brushes and colors of paints, twists and turns an image until the exact piece is arrived at.

Most of the works are often inspired by what he sees around him, especially the frustrations in the eyes of passengers bearing it all in public buses, or angry voices venting on political talkshows on the radio.

“So, I create these personified characters which become metaphors of peoples sentiments and also they become like protagonists to advocates for the voiceless and the masses.”

Also, Isshaq’s works reflect the unseen feelings of the subjects he often engages or observes around him. He therefore has the tendency of casually sniffing around for things like moods, desire, longing, strength anxiety, aspirations, empathy and apathy. He then expresses them in an art form. 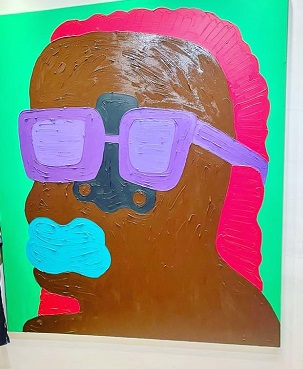 Isshaq who describes himself in a non-derogatory manner as a lazy artist, says his paintings are most often than not semi-abstract in nature.

“Currently I have affinity for chronicling the human condition (figurative). Most of the characters I paint and from imagination, sketches and occasionally references photos.”

Isshaq’s works are influenced by American and British Irish artists, Jean-Michel Basquiat and Francis Bacon, both late. Francis Bacon was described as a figurative painter who incorporated unsettling imagery in his body of works. Basquiat on the other hand, who died aged 27, was part of the 1980s neo-expressionism movement which inspired artist to make their works more vivid, by incorporating a good amount of colors into their works, and make them stand-out. 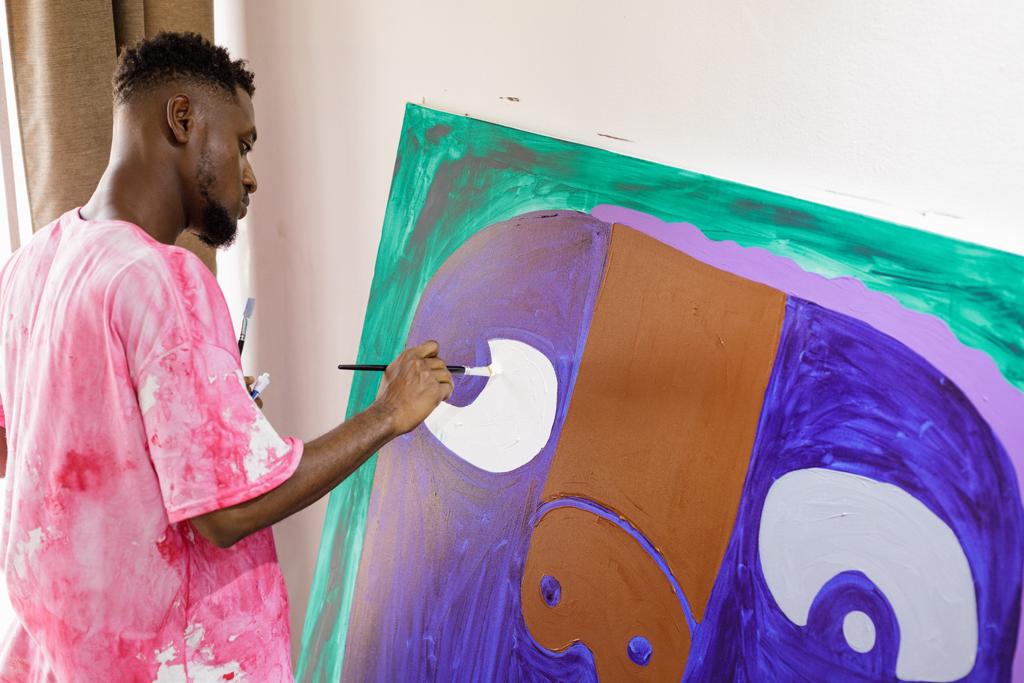 Anyone familiar with the works of the two artists will elemetns of their footprints in how Isshaq approaches his subjects; rough, arbitrary, and in a contrived manner, which stems from using his practice to explore as well as investigate the complexities inherent in our sociocultural systems.

Much of the arts scene in Ghana has seen record numbers of artists whose works are going global. In most art shows and galleries in Europe and North America, Ghanaian artists are displaying their works next to already established ones, and they are getting the needed attention. Isshaq’s works are listed on art marketing platforms where the big boys play, but he does not think his contemporaries receive the needed respect from the public.

“I believe a lot of people still don’t understand what Art is. It is very important for the masses to be educated on what art really is,” he said. “This education will help create awareness of our existence. I strong believe this awareness will be a point of departure for a broader conversation on exposing, appreciating and acknowledging visual artists in Ghana.”

Isshaq Ismail was educated at the Ghanatta College of Arts and Design, and he majored in painting. He has done both group and solo exhibitions in the New York, Dubai, London, Germany and South Africa. In 2018 for example, he exhibited at the Nicholas Roman Fine Art in New York. His works have been recognized by various bodies and in 2019 was shortlisted at the GUBA (USA) awards as an “Influential Artist.”