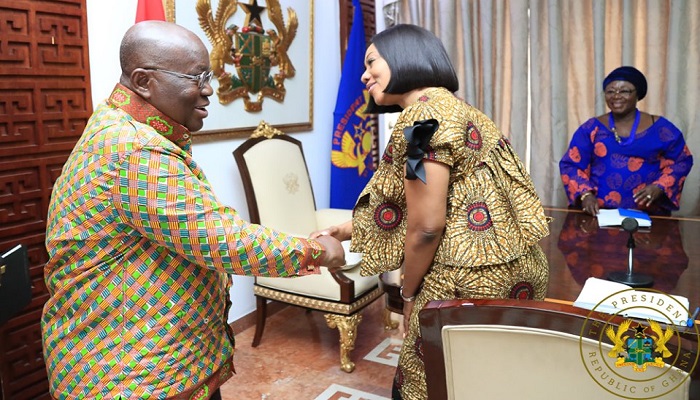 When you are aggrieved and bystanders ask you to seek justice in the court, that certainly isn’t bad advice. But that advice can be bad if your adversary is in the process of taking what belongs to you and bystanders and the police, instead of helping you to take back your property, are appealing to you to let him or her take it away so that you proceed to court to fight for it later.

The court is not a place any sane human being would want to go when there is an opportunity to avoid it. If a problem can be resolved without going to court, why endure the waste of time and resources? Why would you subject yourself to the acrimony and technical maneuverings that come with the judicial process if the problem can be resolved?

The opposition National Democratic Congress (NDC) claims it has been cheated and handed a raw deal in the just ended parliamentary and presidential elections. While the NDC is yet to convince Ghanaians that the infractions are significant enough to overturn the presidential verdict, the party seems to be convincing Ghanaians about its firm grips on the majority side of the House of Parliament.

The NDC has made a strong case for the Techiman South Constituency parliamentary results, which the Electoral Commission (EC) has declared for the candidate of the New Patriotic Party (NPP). In the heat of the collation, heavily armed military and police stormed the venue. In their attempt to restore order, they shot into the crowd and killed at least two persons and injured several others.

A video of the incident shows that when the police and military started firing warning shots, the crowd started to move away. However, instead of shooting into the air, some of them directed the barrels of their guns at the people and killed two unarmed civilians.

If this had happened in the United States of America, we would have joined the chorus of “Black Lives Matter”. However, in the home of the black continent, we have shown time and time again that the lives of animals matter more elsewhere than the lives of black humans in Africa.

So has happened to the killers. And nothing will happen.

Top members of the NDC filmed their encounter with the Techiman South Constituency’s electoral officer. In that video, the party requested a copy of the tallied results on the “pink sheet”, based on which he declared the NPP candidate winner. The NDC was supposed to have been given one, but he hadn’t given it to them. Instead of giving it to them, he said in the video that they should go to the regional office of the Electoral Commission.

The NDC pointed to him in the video that he (the constituency electoral officer) was the returning officer in the parliamentary race. He had the power to declare the winner so he should give them the pink/results sheet because the regional officer had directed them to him. He did not give it to them.

The EC, which was quick to respond to every allegation of wrongdoing and went to the extent of publishing regional and constituency pink sheets of the presidential elections, did not respond to the Techiman South allegations of wrongdoing. Instead, it went ahead to gazette the results.

And the NDC is being asked to go to court.

Why did the EC not look into the allegations of wrongdoing in that constituency, call their officer in charge of that constituency to order if there was anything wrong? And why has the EC not told us whether or not the NDC had a legitimate concern in Techiman South?

What is more worrying is that the EC has published the “pinks sheets” of the presidential results summary from the various constituencies on its website. The Commission doesn’t have those of the parliamentary on the website when I checked this morning (December 24, 2020).

And as if that is not bad enough, the EC added “Covid-19 to Donald Trump” by getting the figures for the Techiman South presidential election wrong. 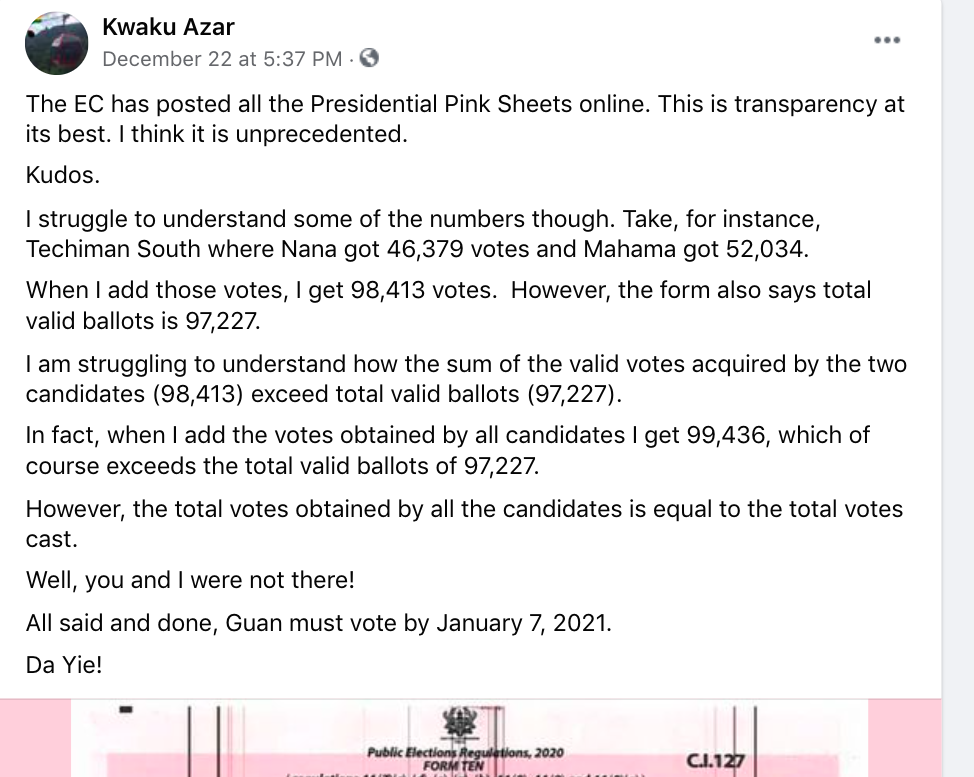 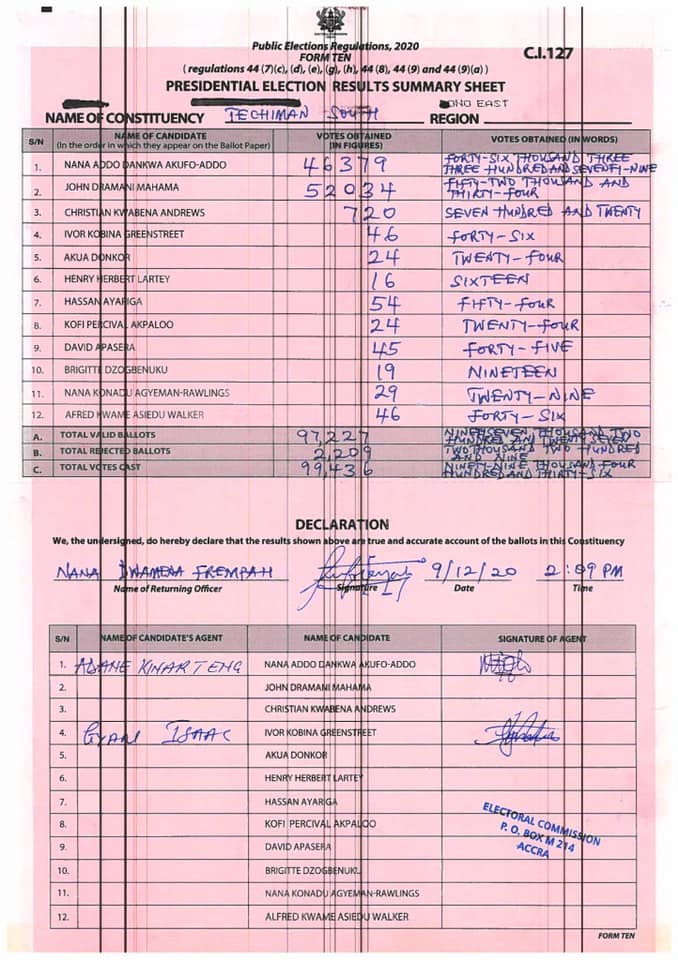 For this and other unpardonable errors at both the constituency and at the headquarters of the EC, I think it wouldn’t be out of place to rechristen Ghana’s electoral body “Errortoral Commission” until further notice.

The most disturbing issue about this election, however, has to do with the decision by the EC to stop the people of Santrokofi, Akpafi, Likpe Lolobi areas, often referred to as SALL, from voting in the parliamentary election.

Those people have been mistreated for a long time. When the Akufo-Addo administration decided to carve Oti Region out of the Volta region, these people protested that they wanted to remain in Hohoe, and for that matter in the Volta Region.

They did not get their wish after protests and letters and stakeholder meetings.

Like the African fruit bats, the people of SALL areas who are citizens of Ghana, could not tell whether they were birds or mammals when their administrative position on the map of Ghana was questioned.

The assembly member of Santrokofi Gbodome and Bume Electoral Area, Phillip Kweku Adom, told me that after the creation of the Oti Region, all the administrative issues affecting the SALL areas such as education, healthcare and everything else was still under Hohoe. Only the police and other issues on security and the judiciary were, however, handled by the Jasikan district.

After the district assembly elections about a year ago, those of them elected are yet to be sworn into an assembly.

They were, however, asked to register and take part in the 2020 elections. On the eve of the elections, Sunday, December 6, 2020, the EC issued a press statement and explained that eligible voters in the Guan District (which was to be created for the SALL areas) would vote only in the presidential election in the Buem Constituency.

So as we speak, the people in these areas are not represented in parliament. Some analysts have claimed that there was a grand plot to take them away from the Hohoe municipality in order to pave way for the victory of the Energy Minister, John Peter Amewu, who showed promise of winning that seat.

According to the theorists of this conspiracy, the people in these areas felt mistreated in the creation of the new region and were going to vote in protest against the governing NPP and no amount of inducement from Mr. Amewu would have swayed them.

Whether or not the weavers of these tales are wrong, one issue remains unacceptably wrong.

The people of Guan Constituency, have no representation as the 8th Parliament of the Fourth Republic is due to be inaugurated in two weeks.

On October 19, 2017, President Akufo-Addo inaugurated a Commission of Enquiry for the Creation of New Regions. The Commission held national hearings and consultations and presented a report. All the legal process went through. Nationwide education was carried out, and in December 2018, a referendum was held and six new regions were created.

All these happened in 14 months.

Between the referendum in December 2018 and the general election in 2020 is about 24 months. Why has it been easy to create six new regions in 14 months and not be able to create a district in 24 months?

So what was the government (headed by President Akufo-Addo) doing all this while and has not been able to create a single district? The new district would have enabled the Electoral Commission to complete the process and allowed the people to vote.

READ MANASSEH’S FOLDER: The trial of Mensa Otabil
And since that was not ready yet, why were they not allowed to vote in their usual constituency?

At what point did the EC realise that the people of Santrokofi, Akpafu, Lolobi and Likpe traditional areas would not be able to vote in the parliamentary election?

Why did the EC decide to wait until the eve of the election to make the announcement? Was it a deliberate plan to disenfranchise them and deny them the opportunity to seek a legal injunction on the process that affected them?

Now parliament is split into two equal halves between the NDC and NPP. We don’t have a majority. Why are the people of the SALL areas not allowed to vote so that we can resolve this unprecedented constitutional puzzle?

If they cannot be given the opportunity to elect their own MP, why won’t we allow them to vote where they have always voted—the Hohoe Constituency?

It matters a lot to our democracy who is the majority and who is minority in parliament. There is a high possibility that if the people from SALL are allowed to vote, either in their new constituency or old one, the NDC will be the majority at this point and the governing NPP will be in the minority.

Denying the SALL people the opportunity to vote before January 7, will amount to a coup on the legislative arm of our government. And the executive president will have a hand in it.

The refrain is, “Go to court!” But we know those who have created this problem. They have the solution to the problem.

Will the judicial process be completed and have the people of SALL areas to vote before January 7?

So why have the discussions left out those who created the problem? And for how long shall we continue to allow the government and state institutions to use the law as an excuse to chip away significant portions of our democratic gains?

What will it mean to go ahead and inaugurate the President when we don’t have a majority in parliament and a speaker? And what precedence shall we be setting?

The writer, Manasseh Azure Awuni, is a freelance investigative journalist. His email address is [email protected]