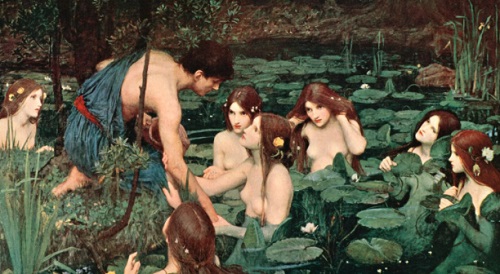 At the time the Black Lives Matter campaign in the UK was drawing the national spotlight to the statues of slave traders, another activist was highlighting the way women are represented in civic statuary.

â€œJust look at what you are being socialised to accept as normalâ€¦â€ says the activistâ€™s placard, focusing on a monument outside the Trafford Centre in Manchester. It shows a seated man bathing his feet surrounded by a clutch of fawning semi-naked women.

Another sign beside a statue in Iowa, US â€“ of a bronze topless woman arching her back and holding her breasts as if to deliberately enhance her cleavage â€“ reads: â€œIowa as a mother figure offering nourishment to her children? Yeah.â€

The placard bearer is ArtActivistBarbie, a Barbie doll posed in front of artworks and monuments, and the playful alter ego of Sarah Williamson, a senior lecturer at the University of Huddersfield. Williamson began the project as way to engage students with feminist ideas, and in particular the way women are portrayed in art.

â€œThis way, I can lead people gently into those conversations,â€ Williamson tells BBC Culture. â€œItâ€™s a form of feminist ventriloquism â€“ my voice, being spoken through a third party with AAB [ArtActivistBarbie] is the equivalent of a ventriloquist's dummy.â€ 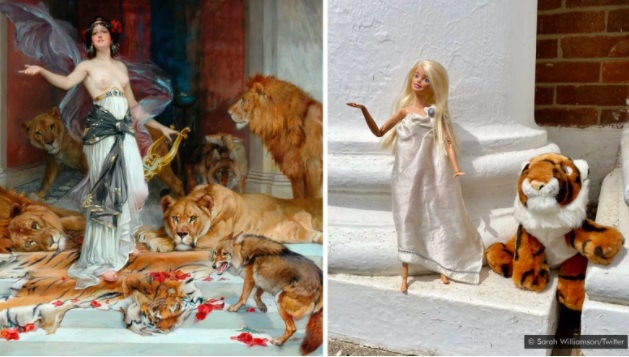 We have to learn to look the past and its faults in the eye â€“ Mary Beard
The classics professor Mary Beard asked a similar question in her TV series Shock of the Nude, which aired earlier this year in the UK. The programme explored the many ways male artists have tried to justify the existence of naked women in their paintings: reclining nudes are depicted as innocently â€˜caughtâ€™, half-bathing or somehow sleepily compromised in a state of undress.

So is what we are looking at art or pornography?

â€œThat is a complicated question and anyone who thinks they know the answer should reflect a bit harder!â€ Professor Beard tells BBC Culture. â€œMy line is that the boundary between art and pornography is always a treacherous one and the point about the past is that we have to see it both in its own terms and ours. We have to learn to look the past and its faults in the eye.â€

For more than 100 years, feminists have drawn attention to sexist attitudes that exist within the art world. In 1914, the suffragist Mary Richardson attacked VelÃ¡zquezâ€™s Rokeby Venus with an axe. The painting portrays Venus looking in the mirror, turned away from the viewer with her bottom at the centre of the canvas. Richardson claimed her protest was partly at the way men gaped at the painting, which hangs in Londonâ€™s National Gallery.

Â â€œDo women have to be naked to get into the Met Museum?â€ shouted one billboard poster put up by feminist art activists Guerrilla Girls in the 1980s. At the time it seemed they did â€“ less than 4% of artists in the modern art section of the museum were by women, but 76% of the nudes were female. With smart, cutting messages delivered via large-scale billboard works, the Guerilla Girls sought to name and shame the art world for its unapologetic disregard for women and other minorities in art.

If you want, compare Goyaâ€™s Naked Maja to a Playboy centrefold and tell me the line is not blurred â€“ Hans Maes
In 2018, British artist Sonia Boyce took a different approach when she staged a removal, in front of an audience, of Hylas and the Nymphs by John William Waterhouse from Manchester Art Gallery. The space on the wall, where the painting depicting a clutch of semi-naked young girls luring Hylas into a lily pond had hung, was left empty for a week. â€œMy aim was to draw attention to â€“ and question â€“ the ways in which museums make decisions about what visitors see, in what context and with what labelling,â€ Boyce said after the move provoked a furious backlash with accusations of censorship, political correctness and feminist extremism. â€œTaking the picture down was about starting a discussion, not provoking a media storm.â€ It did both. The issue of art and pornography is a contentious one.

â€œThe boundaries have always been blurred,â€ says Hans Maes, a lecturer in art history at Kent University who has written extensively on the subject. â€œItâ€™s generally assumed that pornography has two key characteristics: itâ€™s sexually explicit and its aim is to sexually arouse the viewer. Well, throughout history and across cultures you can find great works of art that share those very characteristics. Think of some of the mosaics in Pompeii, Kama Sutra sculptures or some of Gustav Klimtâ€™s explicit drawings. If you want, compare Goyaâ€™s Naked Maja to a Playboy centrefold and tell me the line is not blurred.â€ 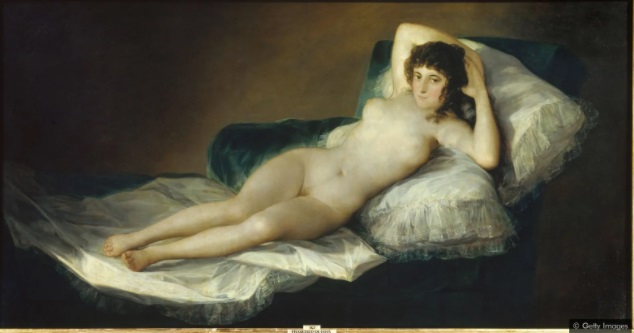 In 2014, performance artist Deborah de Robertis sought to make just this point by exposing herself in front of Gustave Courbetâ€™s The Origin of the World painting in the MusÃ©e dâ€™Orsay in Paris to reproduce the close-up image of a womanâ€™s genitals. She was subsequently arrested for posing naked in front of Manetâ€™s Olympia, also in the MusÃ©e dâ€™Orsay. Her point was to raise the question: why is one representation of the human body defined as art and another as pornography?

In the past, censorship of explicit images was often motivated by conservative and religious values and fears of moral corruption. By contrast, feminists who challenge objectifying sexual imagery want equal rights for women, and they fear the spread of objectifying images is detrimental to that cause. At the time of Boyceâ€™s intervention in Manchester, a fourth wave of feminism was surging amid the wave of accusations against Harvey Weinstein and Jeffrey Epstein and others, and there was a surge of anxiety about how to deal with art made under different ethical conditions from our own.

You donâ€™t have to look very far to find examples. Benvenuto Cellini insisted on using young virgins as models and â€˜defloweringâ€™ them once he had finished painting them. Eric Gill used his own daughters as models and sexually abused them. â€œWe should perhaps distinguish between the context of appreciation and the context of creation,â€ Maes tells BBC Culture. â€œIf we know that an artist abused women and his abusive attitudes are also manifest in the work, then that does affect the status of the work. The work itself will come to appear seedy and morally problematic, once you become aware.â€

In the recent Jeffrey Epstein documentary on Netflix, one of the arresting police officers comments on the sheer volume of nudes on display in the sex offenderâ€™s mansion. In a gallery, similar nudes might be objects of admiration.

Life drawing from nude models is still the mainstay of a fine art education and the vast majority of models are women; yet in the â€˜sanctityâ€™ of the life-drawing room, these women are not naked but â€˜nudeâ€™, and they donâ€™t strip but â€˜disrobeâ€™.

â€œBut of course, the male gaze exists in the life-drawing class,â€ says Mary Beard, who herself posed as part of her investigation in Shock of the Nude. â€œThere are various ways culture tries to remove it and those linguistic devices are used to try to desexualise the encounter. But itâ€™s there.â€

Which is why ArtActivistBarbie, subverting a plastic doll widely vilified by feminists for being a gender stereotype, was a stroke of genius on her creatorâ€™s part. â€œThe issue is discussion and starting to view things differently,â€ says Sarah Williamson. â€œAAB provides a fun and playful way of doing this and, in doing so, trying to create a world in which there is more equality for women and where they are not just the subject of the male gaze.â€

In one of ArtActivistBarbieâ€™s most commented-on posts, she poses on the floor of a gallery in front of Manetâ€™s Le DÃ©jeuner sur lâ€™herbe. In the first picture, Barbie is naked like the woman in the picture and her two male companions are fully clothed. But then the set-up is reversed and Barbie appears in her glad rags while the two men are naked.

Itâ€™s an interesting juxtaposition and one that certainly makes you think.